Cafes are still struggling to sort out their identities with everyone toting a laptop and wanting Internet access: My friend Cyrus Farivar tipped me to a cafe near him in Oakland, Calif., that's trying not just turning off Wi-Fi, but asking folks to not use laptops at all. (That solves the 3G card problem, too.)

The Actual Cafe's owner, Sal Bednarz, posted a long entry on the experiment on a blog about the decision. He noted, 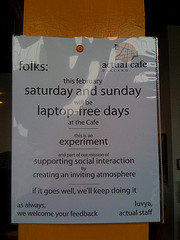 When I walked out into our dining room last week, and saw a sea of laptops, with tangles of power cords everywhere, and so many people wearing headphones, it really upset me. And so I set out to figure out what was so upsetting, and why.

He goes on to talk about community - "we must each support it as individuals" - and then notes,

If we lose money because all or most of our seats are taken by people who spend little money and much time, our business is at risk. Cafes fail all the time. When that happens, we all lose.

This story, which keeps getting written - although I claim dibs as first! - resonates with people because it's about the erosion of conversation, communication, public space. It's about silencing voices. A room full of laptops has the odor of a library, and people shut up. (Update: The San Francisco Examiner takes a good look at this cafe and the context around its decision.)

When a coffeeshop opened a few years ago near my home (not naming names), I went in the first week, and welcomed the manager. I told her how happy the neighborhood would be to have a cafe right there. Her reaction was pretty cold. Over a short time, I discovered that the cafe and its hiring practices favored frosty hip. The baristas have no charm. The place is dark wood, low lighting, semi-uncomfortable. It exudes, quiet, quiet, quiet. I've only been in there a half-dozen times since. (I'm not an annoying customer. In another shop near an old office, I learned every baristas' name, and won a free drink as a result, still am in touch with one manager, and helped get a friend hired. They would typically have my favorite drink in process before I got to the register.)

Cafes like Actual Cafe want to create a third place for people, in which commerce is a component, but conversation is part of what you get. You know the coffeeshops like this. You want in and there's a hum and a buzz, and a warm feeling, and the sound of the sssssshhhhhh from the espresso machine. The coffee may be good or great, but you go because the vibe makes you feel more human.

Posted by Glenn Fleishman at 12:45 PM | Categories: Culture | No Comments