Recently in Listen In Category

Minnesota Public Radio looks at what WiMax may do to the country's only successful for-fee city-wide Wi-Fi network: Brandt Williams examined whether Clearwire's WiMax service entering the Twin Cities could spell disaster for US Internet, which covers about 95 percent of Minneapolis with Wi-Fi service.

There's still room a value consumer in this space. I would suspect one of the typical 16,000 US Internet subscribers has considered and rejected $40 to $60 per month for bundled and unbundled cable modem service, even though that would be far faster and is generally available in the city. The same subscribers might have a laptop or iPod touch that they use for access with the same account while out and about.

Because $20/mo used to be the baseline for dial-up service, that number still has some resonance in predicting whether people will jump up to the next level. You can listen to the story right here:

Posted by Glenn Fleishman at 10:13 AM | Permanent Link | Categories: Listen In, Metro-Scale Networks, Municipal | No Comments

My friend John Moe interviewed me for Future Tense on MPR about airport Wi-Fi: John and I talked about how airports suddenly seem to have free Internet access all over, why that happened, what's happening with the biggest airports, and shutting the lid on your laptop sometimes while you're traveling! 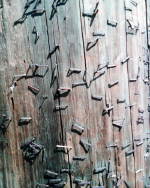 You can't ignore physical realities: Much as we might not like it, the hard work of attaching devices to utility poles and bringing in backhaul to cell and Wi-Fi sites can't just be handled by waving your hands around. Photo by Chris Chan

We can be just as trendy as everyone else, here at Wi-Fi Networking News: Today we launch our first "podcast," the new term for providing downloadable audio that can be picked up via RSS aggregators and loaded on a computer or into portable music players--not just MP3s. (Read Wikipedia for a history of podcasting--and correct it if it's wrong.)

Our first interview is with Martyn Levy of RoamAD, down in New Zealand: [MP3 format, 1 Mb]. RoamAD makes 802.11 mesh networking equipment that uses dense installations of 802.11b commodity gear on the client side with committed information rates that now approach 2 Mbps and 802.11b or 802.11a for mesh and backhaul. Martyn explains their current approach and technology in the interview.

Using Skype's peer-to-peer voice-over-IP software, some Macintosh recording software (Audio Hijack Pro), and the stars being aligned just right, the 7-minute inaugural episode of our audio programming is available. This is the first one of these we've tried, so my audio level may be a little lower than Martyn's and there's a little background fuzz; we'll get the sound bugs worked out soon.

Update: I have added an RSS 2.0 feed that incorporates enclosures of the type needed by podcasting aggregation programs. If you have one of those, you know who you are.

Posted by Glenn Fleishman at 10:44 AM | Permanent Link | Categories: Listen In | 1 TrackBack

The Capital Cabal is offering a free one-hour online chat with Rich Dean, a wireless applications expert: Dean's history is fascinating, and he's ideally positioned to talk about how wireless of all kinds of being applied to work and home. The chat is Dec. 10, 2003, at 1 pm Eastern U.S. time.