Netgear hasn't set the price of its new paired HD video adapters, but promises 99.9 percent reliability for multiple 1080p streams: The High-Performance Wireless-N HD Home Theater Kit, which will ship in Q3 2010, uses a 4-by-4 MIMO array to achieve the results Netgear claims, and I'm inclined to believe them. The company says it can push 40 Mpbs across multiple streams using these adapters, with the video sources being the Internet, IPTV systems, or other devices on the network. The adapters plug into Ethernet ports, and have a simple pairing mechanism.

The 4-by-4 array over 5 GHz coupled with the paired adapter method means that Netgear doesn't need to focus on throughput but coverage and consistency. The extra antennas let them use space-time block coding and other techniques to boost marginal signals and reduce errors in transmission. The device doesn't compress data, so the entire goal is to achieve sustained throughput.

Of course, Netgear could charge $500 for the pair, which would make them ridiculous, but I suspect a price closer to $250 based on how other devices have been marketed in the past, and the target audience for these products. A third adapter can apparently be used to extend coverage further.

Netgear also announced a May release at $79 of the 802.11n (2.4 GHz) Universal WiFi [sic] Internet Adapter, a driver-free Ethernet-to-Wi-Fi bridge that can be powered by a USB port even though no data is handled over USB (it saves a power adapter). The notion here is that instead of buying branded, proprietary adapters, you can just plug into Ethernet.

In this mobile post, I explain my theory about Internet access in transport being driven by entertainment: Trains, planes, shuttles, buses, and ferries all have Wi-Fi, and more is on the way. Delivering movies may be the killer app.

Free BBC Online via The Cloud

The BBC has partnered with The Cloud to make its online services available free at the network's 7,500 hotspots: BBC offers a variety of programming, including TV program (programme) downloads, through its Web site. A special Windows-only player will be supplemented with Mac OS X and Linux versions later this year, and Flash streaming will be offered, too. Downloaded programs can currently be kept on a computer for up to 30 days. At The Cloud locations, streaming and downloading will be available at no cost, but will require a laptop. They'll expand to portable devices like the Nokia N95 multimedia smartphone in the future. The BBC says they have 250,000 regular users of the iPlayer software.

The high-def streaming media adapter gains good network security: Since I regularly criticize consumer electronics and handheld devices that lack full Wi-Fi security stacks, I should also point out when that changes. The Mvix USA MX-760HD is a kitchen sink full of audio and video streaming options that work with high-definition up to 1080p. It can even hijack a video DVD in a computer's drive and play it using an encrypted stream (and a licensed process, the company says).

But they didn't have WPA, although an update was promised. Now the $300 can be upgraded at no cost for both home and enterprise WPA (WPA Personal and WPA Enterprise, which is WPA over 802.1X). Good going!

CES reveals that home media networks will require wired, wireless components: I know this might seem like an obvious conclusion, but the buzz around 802.11n, ultrawideband, and even ZigBee makes it seem like manufacturers think that wires are just too, too passé these days. Not the case, writes David Haskin in Computerworld. CES revealed that the makers of the gear that will link computers and home entertainment systems--not to mention the PC and CE makers themselves--see room for radio waves and copper. For instance, Sharp's 108-inch LCD TV has HomePlug AV support--a 200 Mbps electrical wiring standard that might finally come into its own this year--and no wireless. And network-attached storage for media will likely take a wired path with wireless options. 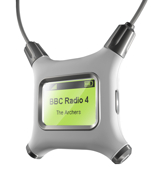 The Mvix Wireless HD Media Center is chock a block with features: It's a hard disk drive enclosure that requires you to BYOHD (bring your own hard drive), accepting any standard IDE internal drive. But what it offers isn't just 802.11b/g/Draft N wireless and 10/100 Mbps Ethernet for network-attached storage. That's just a minor point. Rather, this is a streamin' demon. It supports a host of video and audio formats, including DivX and MP3, to name just two, and has composite, component, and DVI video output with high-def up to 1920 by 1080i; and stereo RCA, 5.1 RCA, coax, and digital optical audio. It can play images, audio, and video from its internal hard drive or via networked computers.

What does it lack? It apparently can't support WPA encryption.

Streaming Media over N: Ruckus Will Show Its Answer

At the CES show in January, Ruckus Wireless will demonstrate its streaming media, voice, and data wireless solution with 802.11n incorporated: The company has often trash-talked claims that 802.11n's increased bandwidth produces a natural solution for moving media and integrating many kinds of communication over the same wireless network. They have a point.

While the typical 802.11n network, in the version expected to be certified in spring, will offer 150 Mbps to 300 Mbps of raw speed, and more expensive, later versions will carry 600 Mbps of raw data, these speeds are highly dependent on the amount of available signal reflection, the distance between adjacent receiving clients, and the number of other Wi-Fi networks (new and old) nearby. To achieve the highest rates of speed, each spatial stream has to be fully employed using double-wide, 40 MHz channels. That will be possible intermittently even on the best networks.

Ruckus says that at January's Consumer Electronics Show (CES), they will show a set of devices that incorporates both 802.11n for speed and their proprietary technology that gets good reviews in its 802.11g version for keeping stutter-free video, drop-free voice, and consistent data pumping across a network. They even take shots at 802.11n in this press release, noting that "despite the periodic high bandwidth bursts, delay- or loss-sensitive applications such as streaming video or voice have remained elusive on "Pre-N" implementations."

As with all these systems, the proof will be in deployed home networks, which will likely come through the kind of partnerships the company already has in place with independent telephone companies and other operators that are deploying IPTV and converged services. But with claims of supporting HDTV streams, Ruckus might have a direct-to-consumer offering as well; it just depends how hard it is to uncouple digital media from digital rights management.

Ruckus's 802.11n system will use Atheros chips with a three-by-three array, which the chipmaker claims will offer 300 Mbps physical data rate and 150 to 180 Mbps of real-world throughput. It uses two data streams and three sets of receive and transmit antennas.

Several major electronics manufacturers back WirelessHD, which would be used for streaming high-definition video and other multimedia content: The specification would use the 60 GHz band, and they expect chips by 2008 that would support 25 gigabits per second (Gbps) of data transfer. Moving that much data is an expensive proposition today, with only high-end Ethernet switches and adapters handling that for wired communications. The roster of founding members includes LG, Sony, Toshiba, Panasonic parent Matsushita, NEC, and Samsung. These firms are also involved with ultrawideband (UWB) in the WiMedia Alliance, which the WirelessHD head said would be a complementary, not competing technology. Because apparently 480 Mbps over a few meters isn't enough to carry the kind of HD programming around a home (and at the distances) envisioned for WirelessHD.

We'll see. My take is that if UWB gains the expected traction in 2007 that is now anticipated, and it starts appearing widely in mid-to-high-end consumer electronics--especially HDTV sets--then WirelessHD has to deliver something pretty remarkable, or be positioned as an evolutionary technology. Meanwhile, the UWB standard from WiMedia will increase in speed during the same period, with some firms already showing 1 Gbps UWB using non-standard implementations.