Devicescape launches new service, software, to reduce friction: The company opened its public beta to enable portable Wi-Fi-equipped devices to attach themselves to hotspots without the tedium--when it's even possible--of logging in. Devicescape, until now, has been known as an embedded Wi-Fi driver developer, making network software that runs on devices that have very little space and very little battery power to carry out that task. They're leveraging their knowledge and experience in launching this new service.

The service couples a small software program that gets installed on a portable device, like an IP phone with Wi-Fi, and an account you set up on Devicescape's servers to enter your various Wi-Fi logins. In the beta, only a few devices are supported, but the company said in a briefing that more are on the way. They also support just four hotspot networks in this beta: AT&T FreedomLink, Fon, Google's Mountain View Wi-Fi network, and T-Mobile HotSpot (USA). More are on the way, as well as the ability to enter WEP/WPA network keys for your own networks.

Devicescape's approach bypasses having to have an embedded browser in devices, some of which will have no screen or the level of input controls that, say, a camera has today. The browser has been seen as necessary to allow data entry and interaction--clicking the I Agree button on free networks that require you to commit to acceptable uses of a network.

It also means that you won't buy a device like the Nikon S7c and be limited to using only the hotspot networks with which Nikon has struck deals to build firmware controls into their camera to manage a connection as long as the device maker has either a software platform that supports other programs being installed, like a PDA, or Devicescape strikes a deal to have their system preinstalled. (T-Mobile has done a great job of being the network of choice for many Wi-Fi-based device launches, like the Kodak EasyShare-One and the Nikon S7c. And Nintendo signed up with Wayport in the US and other networks internationally to pre-program access into its DS game console.)

The company's CEO Dave Fraser said in an interview that Devicescape expects billions of portable devices that have Wi-Fi radios to be in people's hands over the next few years. "Most of them are going to be the low-cost devices that just can't afford to have a browser anyway," said Fraser. "Our goal is to make the sign-on to these proliferating Wi-Fi networks completley seamless. So you don't need a browser--you don't need a clumsy user experience." Fraser suggested that this lack of frictionless authentication limits hotspot utility. "If you had to do that on your cell phone every time you had to make a call," he said, cell phones would never have gained an audience.

When you take one of the supported devices, like the Linksys WIP300 Wireless-G IP Phone, the lightweight on-board Devicescape application connects to the Devicescape server. It does this by bypassing normal hotspot port-based access controls and gateway authentication pages using DNS (domain name system). DNS allows the encapsulation of certain information in special record types beyond IP address records and mail exchange details. Devicescape encrypts your authentication information, so it doesn't pass in the clear; the phone's software decrypts the login details and carries out the connection process automatically. (Yes, they have a patent in progress on this.)

This DNS approach could be blocked by hotspot operators, but blocking DNS in general would disrupt network functions, and blocking Devicescape in particular could prove difficult. In any case, Devicescape sees hotspot networks as partners with which they want to develop roaming and billing relationships.

The portable device doesn't need to store much in the way of how to log in and your authentication details aren't stored, either. Cryptographic protections enable each device to be uniquely identified, too, so anything stored on the portable phone, camera, etc., can't simply be copied to another device to enable it. This ensures that devices are uniquely registered and that they are not cloned through over-the-air interception, hacking, or physical access to the device.

It also means that it could provide the tools to allow different fees for different kinds of devices, and a way to avoid a one-account, one-login problem. In testing, Devicescape execs said they hit login limits with accounts on AT&T FreedomLink and T-Mobile HotSpot, which assumes that a single account is being used on, say, a laptop or a PDA by one person. But one person with many devices needs a unique way to have those devices simultaneously connect. If I walk into an airport with a camera, phone, and laptop, and want to use all three at the same time, no current system supports this. And if your device is stolen and pops up on a network--you could alert the cops! (Mash up of Google Maps, Skyhook Wireless, and Devicescape.)

Devicescape expects to become a sort of aggregator of access, leveraging the fact that you have an account set up with details that could include credit card information in order to use your various devices. (Confusingly, Devicescape is calling a set of devices you use your...devicescape. Ok.) Imagine walking into a hotspot you've never used before, and seeing a dialog box appear on your limited-input device that says, "Would you like to use this hotspot for $2 for 24 hours access?" Click OK, and the billing and authentication happens behind the scenes.

The company said that they aren't looking to displace firms like Boingo Wireless and iPass, with which they could be partners, too, by leveraging those authentication and billing systems with their lightweight software approach.

For more relationship-based use of Wi-Fi in homes and offices, Devicescape will offer in a future release a buddy list feature so that people who trust each other can allow devices to share network encryption keys. This is a very interesting option, because it not only bypasses entering WPA Personal passphrases, for instance--I have spent a lot of time lately cursing interfaces for this on Wi-Fi-equipped phones--but it also means you don't have to provide a "buddy" with the actual key. If you change the key at any time, you just update your Devicescape account's profile, and your buddies don't have make any changes to connect the next time they are at your location.

For now, this public beta offers a limited set of devices and networks to test to show what the potential is. Over time, the company will add networks, equipment, and additional services like the buddy list feature to flesh out the bones of their offering. The marching orders for this service is to bring the coming universe of Wi-Fi-enabled portables into the hotspot world. "Devices today are second class citizens," said Fraser, and he's trying to advance their status to full members of society. 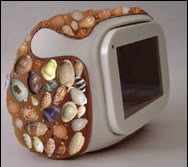 Listen to Internet Radio on a Radio

My brief in the New York Times on Roku's upcoming Internet radio tuner: It's an interesting device and I can't wait to get my hands on one for review in a month or so. I found out a few interesting items not mentioned in this brief from interviewing Roku's founder. Because they aren't using a computer (PCI) bus, their choices for Wi-Fi chips are limited--that's why they are using Philips 802.11b chip with WEP-only drivers.

The WPA drivers are in the pipeline, and the unit could ship with them, but it's unlikely. However, since this is an Internet-connected device, a software update will provide the WPA support with little effort to push the new firmware in by the user. (I wish someone would hack up a $50 WEP bridge with extreme firewall settings for WPA-only networks that want to use WEP-only devices.)