Community Hospital of Ottawa makes available free Wi-Fi for patients, visitors: It's BYO-Laptop for now, but the hospitals will add workstations for patient use later. I recently found out that Swedish Hospital in Seattle, where my wife and I will have our second child in April, has added free Wi-Fi for visitors and patients (hello, Nikon S7c!).

What's your experience with Wi-Fi in hospitals? Post in comments below.

The head of EarthLink, Garry Betty, will take medical leave due to a "serious form of cancer": Betty has led the company's move away from the dwindling dial-up account business into partnerships with DSL and cable provides, voice over IP (VoIP) services, and, significantly for this blog, metro-scale Wi-Fi networks in Anaheim, Philadelphia, and other cities. Mike Lunsford will take over during the "undetermined leave of absence." EarthLink doesn't appear to have any split in terms of direction the company is heading, so it's unlikely Betty's absence will affect strategy.

As someone who beat cancer back in 1998, I can only sympathize with Betty, his family, friends, and colleagues, and wish him a safe and rapid recovery. The company characterized his cancer as "a serious form," and provided no additional details in press reports. 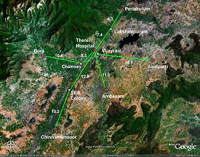 Intel and UC Berkeley devise remote diagnostics: In the southern India state of Tamil Nadu, a central eye hospital can now examine patients through outposts up to dozens of miles away using Wi-Fi to transmit image data from cameras. Thousands of patients were served in this trial, and the university reports that the project will be expanded to five hospitals, 50 linked clinics, and an expected 500,000 patients a year.

Nurses trained in eye care screen patients at smaller village clinics. A doctor at the Aravind Eye Hospital then spends five minutes examining the patient's eyes through a Web camera connection. The patient is given a hospital appointment if the doctor needs a closer examination or needs to schedule surgery.

The cost cited is a little inexplicable: $800 for two routers with antennas. I expect this might include the costs of ruggedizing the cases and the like, but it's not clear. There are no viable broadband providers in the area, and using commodity gear allowed them to create a 6 Mbps link over distances of up to 40 miles using their own software.

Of course, there are greater implications for telemedicine, because once you have local clinics with high bandwidth that can then hop on a larger national network, you can have doctors all over the country (or world) contribute hours towards diagnostic work, reducing the time that patients have to spend in travel or untreated due to cost.

The Overlake Hospital Medical Center in Bellevue uses Wi-Fi across the campus to great effect, Forbes writes: The hospital has 2 the the 8th power beds, which is appropriate given its proximity to Microsoft. The campus used Airespace gear to unwire about 95 percent of its 19-acre campus. They've aggressively added VoIP to deal with roaming personnel, including a substantial Vocera deployment.

They went paperless in January, and they're working to make patient and medication ID available through handheld barcode scanners. Doctors have Tablet PCs in the ER, while emergency nurses use computers on wheels.

Patients and guests have access to the public network, which saw 250 users in the two weeks after a soft launch.

New Zealand hospice uses Wi-Fi to offer Internet access to patients: One of the many difficult parts of winding one's life down is surely the absence of family and friends who cannot get to your bedside or spend as much time there as they or you would like. Providing Internet access could be a remarkable tool for those who want to communicate during their last days and would otherwise have to rely on intermediation, such as someone relaying messages. Of course, not all hospice patients will have the energy, facility, or desire, but it's one more attribute of respect to people's desire to connect.

Down the Hatch: Not the Matrix, But Reality

VitalSense releases wireless medical telemetry pill: take one, and some aspects of your innards are exposed: It's not a pilotable nuclear submarine like they had in Fantastic Voyage, but it's still pretty interesting. The device can obtain core body temperatures as it passes through the system in this first version. The next will grab heart rates. They say other physiological parameters monitors are in the works, and you can certainly see thruster jets and a video camera, plus maybe tiny waldoes for fixing things. Ah, the future. [link via BoingBoing, who got it from our friend Bill at Wireless-Doc]

Posted by Glenn Fleishman at 11:10 AM | Permanent Link | Categories: Medical

Mountain View, Calif., hospital offers free Wi-Fi: For now, service is free for everyone, but visitors will probably be charged $3 per day starting in September. The service will expand to include bedside computers between 2007 and 2009 when a new hospital opens. For now, customers must bring their own computers or handhelds. A filter will prevent access to what the hospital considers is inappropriate content.

As more diseases become managed instead of fatal, more people than ever before will feel fine and be productive members of society, but forced to spend large amounts of time in outpatient care. I've spent many hours on two occasions in the last year in an outpatient surgery waiting room, and while the surgery itself wasn't life-threatening, there's nothing worse than idle hands when you have no information.

I continue to hear that hospitals need wireless networks (with robust security) more than practically any other operation. You have many employees who are never at a desk, who have extremely time-critical tasks in which information can be a key to life and death or at least the difference between great care and good care. Many companies have targeted the medical market, and we should see more innovation and more interesting integration appearing over time, like Vocera's communicator badge.

Posted by Glenn Fleishman at 9:45 AM | Permanent Link | Categories: Medical