That growth is fueled by several factors, which I discussed 22 April 2010 in writing up the Q1 2010 statistics ("AT&T's Wi-Fi Usage Report Omits Switch to Free by Most Locations").

At that time, AT&T was looking at a quarter of free McDonald's service, along with a simplified access deal that Starbucks had put in place in December 2009. The latest quarterly report again doesn't mention a significant factor: Starbucks removing all restrictions on use, no longer requiring any card or account to access its in-store Wi-Fi; that change took place in July.

AT&T also added more iPhone users and had the first full quarter with 3G iPad owners who, with an active 3G plan (it's optional to keep it active) have free access across all AT&T paid locations.

The numbers are impressive, but it's still strange to me that AT&T leaves out positive mitigating factors that show its strength across several lines of business that lead to these huge numbers of sessions.

The company provided a nifty visualization, too, downloadable as a PDF file. (Preview below.) 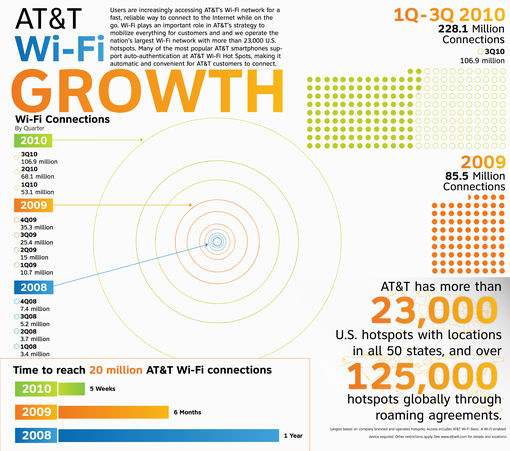 Posted by Glenn Fleishman at 9:45 AM | Categories: Free, Hot Spot | No Comments