This is a first for yours truly--Wi-Fi from a commercial flight: I'm blogging from somewhere above 10,000 feet on Virgin America's press event flight to kick off its commercial launch of Internet in-flight Internet service. The flight is littered with e-celebrities and a few real ones (a couple of the great ensemble from 30 Rock are here). We're flying over the ocean. And the Gogo Internet service from Aircell seems to be working just fine. I've Twittered, I've IM'd, and I'm about to post this blog entry. (Success! Updated later.)

There are about 130-odd people aboard, and I should apparently recognize lots of people, but I am so unhip, as Douglas Adams once wrote, that it's a wonder my bum doesn't fall off. I was able to talk briefly with Dave Cush, the head of Virgin America, who is very keen on having this rolled out, and at some length with Jack Blumenstein, the head of Aircell. (I did a in-flight air-to-ground interview with Blumenstein for BoingBoingTV which I'll link to when my fine friends there have the segment edited and up.) 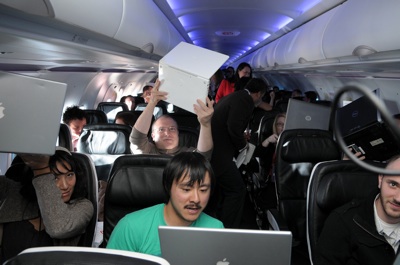 The service works as one might expect: Aircell has had months to troubleshoot problems via the American pilot, and we're flying right around San Francisco, so nothing unpredictable in the middle part of the country. In a quick test using Qwest's bandwidth tester, I was able to get 700 Kbps downstream--while there were 100 other people using the service, too.

This wasn't a commercial flight (it was technically a charter), but it was on a regular Virgin America Airbus 320 using Aircell's ground network. Some material was broadcast live from the plane to YouTube Live, which was hosting a simultaneous event on the ground at Fort Mason in San Francisco.

This is the first time I've used Internet service on a commercial plane. Back a few years ago, I was on a Connexion by Boeing press flight that used ground stations for the flight instead of the production satellite servers.

Virgin isn't the first domestic airline to launch Internet service; American Airlines has a pilot with 15 planes that have been in the air on cross country routes for nearly three months. But Virgin is poised to be the first airline to launch Wi-Fi fleet wide. Delta has made a commitment--and they have several hundred planes in the U.S.--but hasn't gotten its first bird launched with service. Alaska, Southwest, and JetBlue have various plans that seem to have been pushed into 2009.

(Photo courtesy Virgin America. I'm the guy in an oatmeal sweater holding a white MacBook up. Disclosure for clarity: I paid my own way to San Francisco for the event.)