Yesterday was the party flight, today the light of day: For a couple hours on Saturday evening, I was on the hottest flight in the air--well orchestrated by Virgin America to bring together bloggers, press, online celebrities, and a few others, along with a hunk of the staff from Aircell and Virgin America's PR and marketing group. I've uploaded a small set of photos (some a bit abstract due to low lighting).

It seemed like a rousing success to me from both the technical and marketing angle. The service received positive reviews from all aboard, including me, Gizmodo, Engadget, and Cnet. (I was surprised to not see more blog entries or news stories given the quantity of press aboard, but many of those stories will likely follow during the work week.) 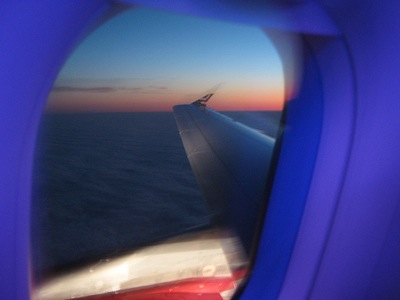 I spoke briefly with Dave Cush, the chief executive of Virgin America. He seems very taken with the idea of having a service that no other airline is offering fleet wide. There's a predictability with fleet wide deployment. American's tentative step has probably resulted in low usage due to travelers simply not being aware of the service or trusting that it's available.

Gogo's sign-up process is the only friction in using the service. You must sign up for an account, just like at Amazon or any ecommerce site, and that's irritating although perfectly reasonable. One trick to sidestep this on flight is to sign up in advance. There's no cost, and this allows you to put your credit card number on file. The company has a deal in place with iPass that hasn't turned into anything public yet, but I expect that when that goes live, iPass customers will have the single sign-in they have now, which will bring hundreds of thousands of business travelers into the mix. (This also avoids separate expensing and itemization--and rejection of same--because IT departments can pre-approve certain extra charges via iPass, as I recall.)

Although I didn't have to a chance in my conversations with Jack Blumenstein, the chief executive of Aircell, to talk about the future of the service, I did glean that Aircell is interested in LTE as that standard develops. Aircell uses essentially off-the-shelf EVDO Rev. A over their exclusively licensed frequencies. EVDO Rev. A uses 1.25 MHz channels; Aircell has 1.5 MHz in each direction, so it's a neat fit. That gives them a raw rate of 3.1 Mbps over 1.8 Mbps, with actual top performance somewhat lower. (In some tests, people have gotten 2 Mbps downstream on an American Airline flight with Gogo installed.)

LTE could potentially double to quadruple that rate when it's commercially available, and there should be 1.25 MHz profiles available, even though LTE will typically be used with 5 MHz to 20 MHz channels.

In talks with various folks at Aircell, it's clear that the company is still early into its settling-in period with airlines, and that more baroque and interesting options will be appearing over time. For instance, should the charge for a red-eye flight be the same as a daytime flight? Right now, it is, but the company is interested in dynamic pricing, in which time of day and other factors play in.

They're also aware that that their two-tier pricing ($10 for 3 hours and shorter; $13 for longer flights) isn't that appealing for short hops, such as the one I took yesterday from Seattle to San Francisco. Right now, most of system will be built on cross-country or 3- to 4-hour flights, and as more planes come online, all of this will be examined.

Aircell staff mentioned in passing yesterday--and FlightGlobal expands on--that there's another airline in the wings beyond the four announced airlines. Aircell told FlightGlobal that a sixth airline is near a decision, too. 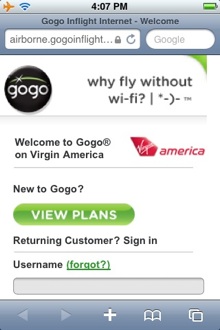 One staffer told me that the company is also working on planes to integrate satellite Internet at the peripheries of their American profile, so that airlines that fly into and out of the Aircell ground footprint would be able to have some kind of seamless access. I'm looking to get more details about this.

Beyond the Wi-Fi, the Virgin America experience is rather marvelous, because you're flying new planes that were designed with 2006/2007 in mind, not 1996/1997. For every seat in first class and between each seat (thus two per row) is a charging/networking setup: power, using a normal North American three-prong jack; USB; and Ethernet.

The seatback entertainment system, Red, didn't live up to reports. I used Red on three different planes, and was unimpressed by the system's responsiveness. It's a very "heavy touch" touch screen, and doesn't support gesture. Navigating the TV schedule was baffling. The TV system didn't show more than a couple channels on the two commercial flights I took, showing a technical error screen from Dish TV instead. The selection of music was good, along with the ability to create a playlist, but the sluggish interaction coupled with touch responsiveness made it a chore.

Several Red features will require Internet connectivity, and it was interesting that they listed those options (like email and chat) with a "not yet available" label, to pique interest. In every arm rest is a tethered two-sided controller: a keyboard on one side and buttons for the entertainment system on the other. The keyboard makes chat and other features possible, especially as Internet access is rolled out.

Virgin America doesn't take cash, which is fascinating and makes a lot of sense. Every Red screen and every controller can handle a credit card swipe. You order drinks and food from the Red system, paying for them with the card. Once Internet access is in place, it looks like you'll be able to set up an account with Virgin, and simply login and charge movies, premium TV shows, food, drink, and even Internet access to that account.