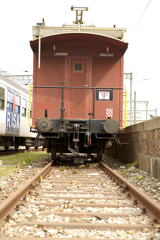 A majority railway authority in the Bay Area and counties has issued a request for companies to test broadband wireless along one route: The Capitol Corridor Joint Powers Authority (CCJPA) operates along a 171-mile route that's packed with commuters--1.25 million passenger trips a year. Folks commute in from the foothills and mountains, from the SF Bay to the state capital, and among all points in between. Sixteen stations serve the route from Auburn (northeast of Sacramento) to San Jose. The CCJPA operates this trans-county service with BART providing management support under contract.

It's an ideal place for commuters to obtain broadband service on trains, and it's ideal for the authority to use broadband for a huge variety of operational necessities, including on-board security, telemetry, train positioning, and passenger services. The CC line has a few trains hooked up with satellite-based Wi-Fi, and has for some time, but they looking for a much more comprehensive solution that leverages all the benefits of the line's length.

The RFI asks interested companies to consider funding their own trials from Aug. 2006 to Feb. 2007, the results of which will be studied closely not just by the CCJPA, but also by a host of other involved agencies, including Amtrak, the Altamount Commuter Express (ACE), Metrolink down in Los Angeles county, and Caltrans (the state department of transportation). ACE has the longest-running on-board Internet access service--free, even--for its long commuter route from Stockton to San Jose; they just upgraded its service.

The project's principal planner, Jim Allison, said in an interview this morning, "The timing is right to test this sort of application, to learn from these tests. There should be a viable market for these systems in both the urban and the rural settings." Allison works on CCJPA projects under BART's management contract with the authority.

Allison said that no backhaul method would be ruled out, although it's clear from examining the RFI that WiMax might wind up the best technology because of several factors. The CCJPA is explicitly allowing consideration in this RFI for using railway property, rights of way, and fiber optic (where available) to provide service to nearby businesses and residences, as well for trains. User access must be via 802.11b/g with a minimum of 3 Mbps for railway operations (1.5 Mbps in each direction), and 750 Kbps/250 Kbps minimum for passengers.

Because this isn't an RFP (request for proposals), companies can experiment without prejudice, and participation in the RFI process isn't necessary to respond later to an RFP . But the RFI will inform the procurement and RFP process, and it may be that lessons learned here could roll out in a very similar fashion to railways across the region or state. One to three proposals will be accepted for trials along the route, which encompasses hills, mountains, urban cores, and rural populations. An information meeting is April 12, with a submission deadline of May 23. A selection or selections will be announced July 3.

Fiber may be of particular interest as some railways own their own, while others have private fiber on their right of way that can be leased. Pumping a local wireless connection right into fiber could enable one set of services at train stations or other railroad property, as well as providing significant bandwidth for licensed wireless relays to distribute service out across a town. (This is, in fact, part of EarthLink's municipal broadband model in which fiber is used at very few points with licensed wireless used to aggregate traffic to fiber points of presence from clusters of WiMax-like Canopy base stations.)

The CCJPA expects this trial to attract worldwide attention because of the interest by almost all rail authorities in adding broadband. "There's a lot of rail agencies in California and frankly around the states and internationally that would be interested in this as well," Allison said.

The passengers on this commuter rail are fairly likely to use a Wi-Fi network if one might judge demographically. The CCJPA found in a 2005 study that average income was $80,000 and 48th percentile (near median) income was $75,000. 56% of passengers travel for business, and 71% of that group carry a laptop or PDA. No word on how many of the 44% carry laptops--students are a likely large demographic, too. Even better, 33% of computer and PDA users have connected to the existing Wi-Fi service on board for an average of 78 minutes. The route passes by frequent convention sites in San Jose and Santa Clara (the Great America stop).

Of course, one consideration in ultimately building this network is increasing ridership, a perennial concern on most public transportation systems. If operational costs can be conserved through efficiency or lower expenses in using a privately built network, and if passengers become more productive (or have more enjoyment) and thus ride the rails more, that means lower costs per passenger (lower fixed costs) and higher passenger revenue. Allison noted, "If we're rolling along with empty seats, you put another person in that seat--that's instant revenue."

(A personal note here. My father once owned the Fremont Centerville train station during an odd period in its life when it was a furniture store. It's been a train station again for several years, and is part of the ACE system. It's a nice turn of events when my family's past catches up with my present interests.)

I worked in Fremont, California and remember the Fremont-Centerville Train Depot. Glen - you probably are aware that "Centerville" was a burrough or small city along with two or three others in the greater Fremont area.

Regarding railroading, my buddy owns a medium sized WISP near Sacramento, CA is also a Mesh provider. He is interested in providing Mesh WIFI/Broadmand to rail in California.

[Editor's note: Yes, Centerville is an old, old town that got sucked into Fremont's middle. Niles, nearby, was where Charlie Chaplin filmed a number of early silent movies.--gf]