Cell Phones Used on Every Flight 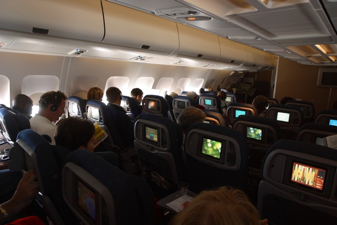 Carnegie Mellon University researchers with the Federal Aviation Administration's cooperation listened for RF usage on commercial flights: Their results show that at least one cellular call is made on every flight during periods in which cell phones are not allowed for use. Further, these calls may impair flight instrumentation, particularly GPS receivers increasingly used for positioning during landing. They spent three months researching in late 2003; one might imagine usage has gone up since then, along with Wi-Fi usage, which is allowed on planes (viz., Connexion), but shouldn't be in use except at the 10,000 foot or higher level.

The researchers note that this is the first field research of this kind ever performed, although they did not witness actual equipment interference--they just measured activity that could cause that form of interference. The FAA and Transportation Security Administration (TSA) both approved this testing. Only the flying researcher and flight crew knew of the special device that measured RF usage and was located in the overhead luggage rack. They collected over 50 hours of data on 37 flights from Sept. 2003 to Nov. 2003.

They concluded that from one to four calls is made on an average flight and that at least one passenger leaves their cell phone on during an average flight. Because their systems allowed only certain forms of measurement due to form factor, they were able to make a number of conservative assumptions about what a cell call was that was originating from the plane, which means they likely identified only a subset of calls and other cellular activity.

The big issue isn't whether interference from the licensed frequencies of these devices, or unlicensed frequencies of Wi-Fi and other equipment, cause direct problems. Rather, it's out-of-band interference, which is regulated and controlled in a variety of ways, the authors note. The "spurious emissions," as they term it, are typically allowable at levels above the margin of safety required for avionics equipment operating in regions in which out-of-band signals would be generated.

GPS devices operate in the 1200 to 1600 MHz range, and there are documented reports from general aviation (private, non-commercial flights) that at least one cell phone model from Samsung caused a loss of GPS function.

They also analyzed both crashes and incident reporting to see if they could correlate the use of personal electronics and problems with avionics.

Their conclusions are that more coordinated cooperation between the FCC and FAA and among government agencies and private industry are required. Incident reporting should be improved and a missing piece of the puzzle dropped for budget cuts returned to funding. More measurement is needed on an ongoing basis. Flight crews should have RF monitors. RF standards should be harmonized.

And passengers should be told that cell phones harm flight operations, as they do on Turkish Airlines.

Cell phone (ab)users: unconscious, disrespectful, discourteous and obnoxious. Public transportation and areas; doctors' offices; theaters; restaurants; checkout lines; in their own dream world walking in the street; and causing accidents when they "drive." Name the place; they are there. Unable to bear silence or be by, or with, themselves for a moment. Totally oblivious to---and inconsiderate of---their neighbors.

Now Disney is developing cell phone for kids. Great: just what is needed; clones of the (ab)users.

Cell phones will become as ubiquitous in airplanes (just wondering how much the cell phone lobby paid for this one) as they are in those places where we are all held captive, a possible danger to flight communications. These (ab)users ought to be relegated to---and locked in---their own soundproof area, compelled to suffer one another's inanities. For the entire flight.

I, and hopefully those who share these feelings, will give our business to the airlines that have the sense to ban them.

If the researcher can measure that cellphones are turned on, is it possible to put such devices on all flights, and basically refuse to take off until the phones are turned off. Even better, place a number of more sensitive devices so the cabin crew can identify where the phone is and the person who owns it. The airline could refuse to carry passengers who don't cooperate.