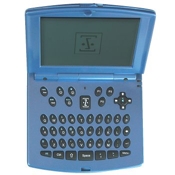 Nigel Ballard reviews the Zipit: a tiny, expensive instant messaging appliance that can attach to a Wi-Fi network. Although it's weird and pricey, Nigel likes it.

My Zipit arrived, blister packed and complete with an integral Lithium Ion battery pack and the smallest AC charger known to man.

Setting it up was a breeze, simple on-screen instructions tell you what to do. And before you can say boo to a goose [ed. note: Nigel is British--gf], the Zipit is off connecting to the first open (visible) network it can see. It doesn't even wait and ask "Is it ok to connect to this one?" it just does.

I ended up manually putting in the non-broadcast SSID and WEP key for my office network, I added an existing IM account details and literally within ten seconds I was tapping out messages to my good friend Beth in Denver. She responded and was unaware I was using an overgrown pager to communicate.

The lack of a backlit LCD and the relatively small screen and spidery font gave me eye strain after twenty minutes of furious typing. But this is really designed for kids who should be eating their carrots in preparation for long bouts of frenzied IM'ing. The build quality is very good and the keyboard is really very usable and the clamshell lid complete with clip is very akin to a laptop that's been shrunk in the laundry.

It will work with existing AOL, Yahoo and MSN IM accounts. It should be noted that it doesn't do anything more than IM over Wi-Fi, but that might be enough as it is small and relatively cheap at $99.

The Zipit has to be the best thing ever invented for cheating on school exams because you just need an able accomplice with a copy of Webster's either in the school library or at another hot spot thousands of miles away! I wonder how long before we read a story of them being banned at a US schools? Danger Will Robinson!

Target and Amazon are now stocking the Zipit in all manner of tasty colors.

PDAs and mobile phones are not the only thing flying off the shelves these days in the wireless technology realm. These days, we also have handheld instant messengers that will actually work right off of local Wi-Fi networks in the... Read More

PDAs and mobile phones are not the only things flying off the shelves these days in the wireless technology realm. These days, we also have handheld instant messengers that will actually work right off of local Wi-Fi networks in the... Read More

"The Zipit has to be the best thing ever invented for cheating on school exams because you just need an able accomplice with a copy of Webster’s either in the school library or at another hot spot thousands of miles away!"

Your accomplice can be a bot - simply look for an appropriate one on the Bot List at http://www.botwork.com/bot_list.html

Note: we do not condone the use of IM/bots to cheat on tests. ;-)

802.11b chips are cheap, this should be cheaper.
What is the procedure for upgrades both firmware and protocol?
Where are the units available in other countries, as it does mention international usage.
What are the specs (memory for buddylists and possibly buffering music streams?)
What OS running/processor?
Will the unit work with pay/free hotspots that force you to a service agreement website
Encryption means a proxy...who runs the servers
Why is their (zipitwireless.com) website crap with no mention of support or even a FAQ/KB
Streaming music...headphones?

I've started a page with a quick review and a running bug/feature list. My goal is (of course) to take the thing apart and see if it can be made to do something more useful.

Hopefully my page can be used as a gathering point for information about this product, since I do think the hardware is pretty decent.