Alaska Airlines finally announced its test launch of Row 44's satellite-backed in-flight Internet service: Alaska's routes take them mostly over water to Alaska or Mexico from its Seattle hub, and thus Aircell's solution is a bad fit. The airline and Row 44 have been talking about trials for quite some time. Today marks the first live launch of a plane, apparently a single 737-700, which will fly from Seattle to San Jose today. This plane will fly for 60 days while they test the offering.

If "successful," and the press release doesn't define what success means, a schedule will be set for installing service across its fleet. Pricing hasn't yet been set; it will be free on this aircraft during the trial.

Row 44 is using satellites, the same Ku band type that Connexion by Boeing employed, but the company has claimed in the past that its combination of advanced antennas and secret sauce lets it extract massively higher data rates than Connexion while keeping the costs at a level that profit can be earned. 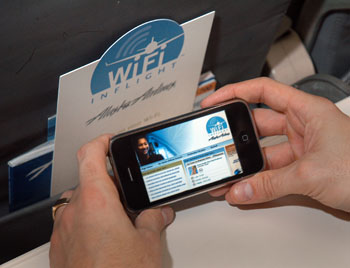 Peggy Noonan, Wall Street Journal opinion writer, finds inspiration in in-flight Wi-Fi: Noonan, a former speechwriter for President Reagan, had a brief exhilaration in sending and receiving email on an American Airlines flight because it reminded her of a better time in America's past in which innovation and was all around. "If you were paying attention, if you understood you were witnessing something great, the invention of a new age, the computer age, it caught at your throat." Despite the collapse, the uncertainty, and the change around us, Noonan is optimistic. She believes that the future is in change at local levels, from the bottom up. "No one trusts big anymore. In the future everything will be local."

Posted by Glenn Fleishman at 9:52 AM | Categories: Air Travel