Wi-Fi Rail says they're starting work on putting the Internet into the BART system: After many months of contract drafting or other bureaucratic hinkiness, Wi-Fi Rail has a signed contract with the Bay Area Rapid Transportation system operators. BART covers a huge hunk of the San Francisco Bay Area, out into suburbs and even former exurbs.

Wi-Fi Rail said in a press release that they'll have the first chunk of the system active in 2009, although they continue to operate four downtown San Francisco stations and some of the tunnel between them, as they have for well over a year. (During which time, 15,000 users registered.)

Update: The San Francisco Chronicle adds a few details. The contract is for 20 years. The first rollout of the project will cover San Francisco and Oakland stations, and the trans-bay tunnel that connects SF and Oakland. BART comprises 104 miles of track and 43 stations, all of which would be covered.

The company uses a kind of leaky coax, a method of turning a stretch of wire into an antenna, to provide continuous high-speed coverage in tunnels, which is a neat trick. They claim the consistent ability to reach 15 Mbps upstream and downstream.

The system will be fee-based: $6 for two hours, $9 per day, or $30 per month. Don't expect to buy a Boingo or iPass plan and get unlimited BART roaming, too, from what Wi-Fi Rail has previously said. The Chronicle reported that Wi-Fi Rail will offer chunks of 3 1/2 minutes of free service followed by 30 seconds of ads.

With the huge growth in Wi-Fi–enabled handhelds (phones, gaming devices, and music players), Wi-Fi Rail expects that its high-bandwidth offering will have many takers.

Only two potential customers for the service were quoted in the Chronicle's article. Thomas Hawk, a well-known photographer who works for Zooomr, makes the rather insane statement that having systemwide Wi-Fi that he'd have to pay for isn't worthwhile. For a photographer, I'd think a reasonably priced 15 Mbps upstream connection would be crazily useful. But that's just me. I have 768 Kbps upstream at home (3 Mbps down), and would die for 2 or 3 Mbps upstream, even.

At $9 per day, of course, that's too much. But the Chronicle should have found a few business commuters, for whom an extra 60 to 90 minutes of work per day en route (instead of at home or at the office) would make a difference. 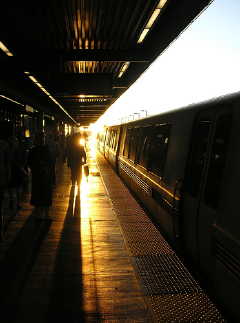 Posted by Glenn Fleishman at 7:42 AM | Categories: Rails