Weekend Remembrance of In-Flight Internet Past

I was digging around my basement looking for a USB extender and came across this gem: Anyone remember Tenzing? Anyone? First folks to put Internet access (sort of) on planes? Well, I do. Tenzing was a Seattle company that was later merged into what became OnAir (a Airbus/SITA joint venture).

Tenzing's ultimate goal was Internet access via satellite on planes, but they started with a clever workaround. Using Verizon AirFone's narrowband air-to-ground phone service and an onboard proxy server, Tenzing offered email on United and, I believe, Delta for a short period. The service offered subject lines for a small fixed fee (a few dollars a flight) along with the first part of a message, with longer messages being charged by the K. 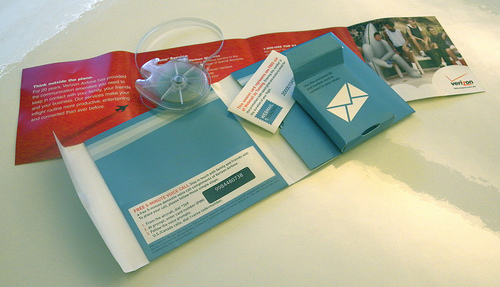 The service didn't catch on fast enough, and then 9/11 hit, which put the domestic airline industry on the skids from which it still hasn't recovered. Tenzing shed workers, and then reorganized its assets into what was transferred to OnAir.

This Connectivity Kit that I dug up was a promo to let people test out Tenzing's service. It came with a card good for a short, free Verizon AirFone call; a code for one free Webmail session; and a retractable RJ11 phone cable because this required a modem connection over the local phone network. A CD came with Windows software; Mac users just entered 123-4567 for the dial-up number.

Now, what's amusing about this blast from the past? This is precisely the service--sans phone cord--that JetBlue is offering on its single equipped test plane that has Internet access. Back on 8-June-2008, the LiveTV division of JetBlue that won 1 MHz in the U.S. air-to-ground spectrum auctions in 2006 purchased AirFone's ground assets--communication gear on 100 towers.

While I don't have direct proof that JetBlue is using the same sort of system as Tenzing, the reported onboard features and speeds make it pretty clear that the company hasn't upgraded equipment on the towers yet, though they plan to do so.

Happy Thanksgiving to my fellow Americans; enjoy a few days of peace and quiet, the rest of the world.