Nikon announces new Wi-Fi camera with Wayport hotspot link, WPS: The S610c with Wi-Fi inside, shipping in September for $330 (MSRP), supports Wi-Fi Protected Setup (WPS) for single button connections to home networks, and a two year subscription to Wayport's hotspot network for uploading photos. This is nearly 10,000 McDonald's and 1,000 hotels, and doesn't include the Starbucks locations Wayport is building out for AT&T. The camera has a 10-megapixel sensor, 3.6x zoom lens, and 3-inch LCD screen, as well as vibration reduction, and up to an effective 3200 ISO. 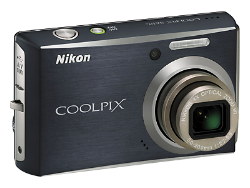 Oddly, Nikon also announced the $500 P6000 with a built-in GPS receiver, 13.5 MP sensor, 4x zoom, and effective 6400 ISO--and a built-in Ethernet jack. Which is a very weird choice. I know Wi-Fi adds cost and reduces battery life-span, but I would think that GPS plus Wi-Fi would allow assisted GPS for faster coordinated lookups (if the Wi-Fi tapped into Skyhook's system and cached some location information), as well as offering automated uploads, and Wi-Fi positioning when GPS signals couldn't be reached.

Posted by Glenn Fleishman at 11:13 AM | Categories: Photography