Creative unveils ZEN X-Fi: The handheld music player, one of the first to have what appears to have real flair without being an iPod ripoff, can stream music from a local collection over Wi-Fi. It also includes a Secure Digital slot, instant messaging (via Yahoo and MSN), an FM tuner, and a wide LCD scree. The unit is on sale in Singapore for about $170 for an 8GB model without Wi-Fi; a Wi-Fi-enabled model is $250 for $16 GB and $300 for 32 GB. They're due in the US "soon." 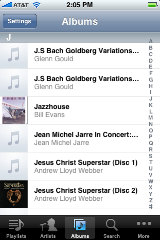 iPhone, iPod touch now Wi-Fi remote control (see screen capture at right): The iPhone 2.0 software was soft released today, with a download available from Apple that's not yet being pushed via iTunes software when users' systems check for updates. The free Remote software, downloadable from the new App Store on the iPhone or Applications area in the iTunes Store, controls copies of iTunes on the local network once you've used a simple pairing technique. The same is true for the Apple TV with a free 2.1 software update for the digital box that's available now. (Also, you can snap screen shots in iPhone 2.0: Hold down the Home button and then press the top button. The capture is stored in your photo roll.)

Japanese bullet train gets Wi-Fi by next March: This was first announced in 2006; it's still on track, pun intended. The line runs from Tokyo to Osaka.

Network 1 expands its service St. Louis area: The company will offer service in 8 additional cities for a total of 15 in the St. Louis, Mo., area. The network provider is building out a neighborhood at a time using ostensibly commodity equipment. They charge $20 to $50 per month for service, and are focused on residential, rather than outdoor cloud access.