Philadelphia offers a map of its pilot area: Wireless Philadelphia is starting to gear up. They've got a CEO and a staff, and are starting to push out dollars and other information. In a newsletter distributed locally today, they included a map of neighborhoods covered by the 15-square-mile pilot project that EarthLink will build to prove its system works and to test parameters for the system; and rates. 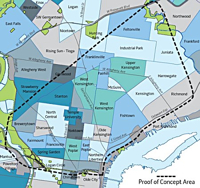 Retail residential pricing is $21.95 per month, with a Digital Inclusion rate of $9.95 per month for those earning at or below 130 percent of the federal poverty level or participants in certain "supportive programs," such as the free lunch program. (The map doesn't appear to be on their Web site, but a description of covered areas is.)

Sacramento receiving bids for network: The city re-issued an RFP after asking its first bid winner, MobilePro, for a higher level of free service than originally requested in the RFP and higher than MobilePro felt was economically sustainable for its model. Sacramento is asking for 300 Kbps of free access, what Google is underwriting in San Francisco, but far below MetroFi's ad-supported free speed. They also want seven percent of advertising revenues donated to digital divide access programs. MetroFi will bid on Sacramento's proposal. A firm that unwired nearby Galt with BelAir gear will expand its WISP offerings into Sacramento and Lodi, but won't answer the RFP. They charge $25 per month for 2 to 4 Mbps, and reject the economics of ad-supported service.

Groups circulate plan for San Francisco to own its network (PDF): GigaOm's Katie Fehrenbacher reports on a plan making the rounds from the Institute for Local Self-Reliance and the Media Alliance which proposes that SF hire out construction but own its metro-scale network rather than continue on the EarthLink/Google path. The document spells out the scenarios, but the groups believe SF could easily recoup a modest investment in a short period of time, with surplus income following thereafter. Their model is similar to that proposed in Boston, in which a non-profit coordinates the network's buildout and infrastructure, and may sell only wholesale access to providers who resell to customers. (Update: SF will study this alternative at a county supervisor's request.)

San Francisco defends progress on talks with EarthLink, Google: In front of the Local Agency Formation Commission (LAFC), a county agency overseeing cable TV franchises and other issues, a policy analyst from the city's executive branch said that talks had progressed, Google's pique notwithstanding. The analyst said that talks have covered duration of term, privacy issues, the building of a test network, and fees. SF would like 5 percent of gross revenue plus utility pole fees, and would use this money for digital divide initiatives. You have to love this part, though: "San Francisco Supervisor Jake McGoldrick said he feared the city was undervaluing the city's assets by seeking just 5 percent of revenue. [Policy analyst Brian] Roberts said that percentage would be very competitive with what other U.S. cities have gotten." Right--here's the problem. This is a network that will be built for the city within the city. It doesn't really matter what other cities have gotten. It matters what San Francisco can negotiate with its preferred bidder, whether that's 1 percent or 20 percent. "Competitive" implies that you're trying to have parity with other cities, which only makes sense when comparing tax rates to attract businesses, I'd argue. "Consistent" makes more sense to me--ensuring that you're not asking something that's totally ridiculous, illegal, inappropriate, or...too little.