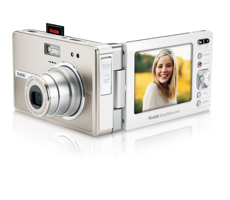 Kodak announces (but doesn't ship) the camera a few days early: The camera, delayed by months, was scooped by two models from Nikon which have Wi-Fi but relatively poor network options. The EasyShare-One takes its place as the third camera shipped (second by brand), but has a much larger scope to its network purview.

The press release says it's the first consumer Wi-Fi camera to ship to retailers, but that's so clearly not the case. Checking the Nikon P1, announced Sept. 1, I see that it's not in stock at any major retailer; the Nikon P2 (the less-expensive, lower megapixel version) is readily available. Kodak says their camera will be available in days to consumers.

The $599 camera includes Kodak's 802.11b Wi-Fi SDIO card; you can see it protruding from the top of the camera in the publicity photo. The first release of this card includes just WEP support. WPA and 802.1X support are due "later," so good luck all you folks with appropriate WPA security enabled in using this camera on your network. On public networks, there's no mention of security, and I'll be curious whether there are FTP or other transfer options involving encryption, and whether the EasyShare Gallery access encrypts your username and password.

The camera is designed to transfer images and video to Kodak's photo service, to view images stored on a PC (over the Internet or a local network, it's unclear), and to view photos and galleries at EasyShare Gallery.

Without the 802.1X module and other authentication support, this camera won't be able to use authentication pages that allow access even to networks that just require one to click Accept for free network policies. Kodak says in the press release that they're working with outdoor venues to support the camera.

Update: The fine folks at Engadget are experiencing the heartbreak of figuring out whether Wi-Fi is included. Their post (with its crossed-out lines and comments) is a pretty good record of how Kodak has mishandled this detail. In Jan. 2005, when this camera was announced, the price was set at $599 plus $99 for an optional (but essential) Wi-Fi card. I heard no more about pricing until yesterday, when Kodak's press release (linked above) noted that the Wi-Fi module was included.

However, as you visit the EasyShare-One pages at Kodak.com, you'll find a variety of statements like "requires optional Wi-Fi card" or "additional options" including Wi-Fi. I'll rely on the press release until I hear otherwise: "EASYSHARE-ONE model (US$599 MSRP, including the KODAK WI-FI® Card)."

Update: Walt Mossberg at the Wall Street Journal finds the camera's Wi-Fi reliability low, and the computer-based software for transferring images required handholding and tweaks that he felt were beyond a reasonable expectation for a normal user. Battery life he rates as poor: one hour when using Wi-Fi, four when viewing stored photos, and 200 shots while taking pictures. Two batteries are included, which is unusual for a digital camera--probably in recognition of this short battery life.