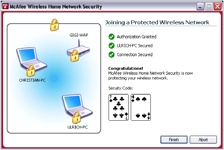 The fruits of McAfee's purchase of Wireless Security Corporation appear in Wireless Home Network Security 2006: The $49.99 security package uses WEP, WPA Personal, or WPA2 Personal to secure up to five personal computers and one or more access points with virtually no user configuration. WSC, prior to its McAfee buyout, focused on small-to-medium-sized businesses (SMBs), and had built modules that let them automatically configure access points to work with their proprietary security software that uses WPA Enterprise to secure a network.

These modules come into play in WHNS 2006 as popular models from Belkin, D-Link, Linksys, and NetGear can be reconfigured to handle a new encryption key without any user fiddling.

Stu Elefant, senior product manager at McAfee for wireless and home networking technologies, and the former VP of marketing at WSC, said the software starts out by generating a long and strong encryption key for the user. "They don't need to know about keys; they don't need to think of a random passphrase," Elefant said. The software installs on Windows 98SE, Me, 2000, and XP systems, and both generates and manages a shared key.

Its elegant interface replaces the Wireless Zero Configuration (WZC) approach built into Windows XP and is a great front-end for the other Windows platforms that lack a good inclusive Wi-Fi detector due to their age. When the software is fired up, it detects an insecure local network and tries to reconfigure it. It uses WEP first, but in a nod to WEP's broken nature, the software also, by default, changes the shared network key every three hours using a distributed schedule instead of a RADIUS server re-authentication. This can be disabled, and WPA or WPA2 can be turned on by more sophisticated users on networks on which all adapters and the gateway can handle those stronger methods. You can also use the tool to set everything up, then extract the hexadecimal network key, suspend rotation, and manually enter that key on non-supported computers.

No one computer acts as the central manager. Rather, you set one computer up which reconfigures one or more gateways. When you fire the software up on an additional computer, it launches an ad hoc network to which any already configured computers will join. Using a secure tunnel, the already-configured machine hands some tokens back and forth for an out-of-band confirmation check. McAfee decided to use two playing cards to allow confirmation. The computer joining the network and any computer already configured will display the same two playing cards to confirm that there's no man in the middle.

On approving the new machine, it becomes part of the lightly distributed system, passing event information back and forth with other comptuers, and able to reconfigure the base station or add new machines. You can't revoke access for a single machine, but you can force a key rotation for all currently connected computers. This rescheduling of rotation prevents any previously connected machines that aren't on the network from reconnecting.

The $49.99 covers a 12-month license for receiving definition updates for the Wi-Fi gateways that the software supports for automatic configuration; renewal will be $9.95, Elefant said. In a nice move, McAfee provides tech support via Internet chat 24 by 7 at no cost.

The product can be purchased online for download now. A shrinkwrapped version will ship in September for retail stores. A three-user version of the software will be bundled as part of McAfee Internet Security Suite ($149.99) and VirusScan/Personal FireWall Plus ($99.99) in mid-October. An additional set of five users can be managed by purchasing another $49.99 copy of the software.

Elefant noted that part of McAfee's interest in acquiring WSC and part of the drive to release this product stemmed from the wireless security scan site that WSC built for McAfee early this year had 60,000 uses before the free tool was marketed. There's a link in this home product to the security scan, too.

McAfee continues to sell WSC Guard and derivative products under their original names; they'll be integrated into the small/medium business products group in the future.