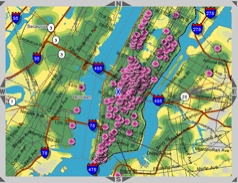 T-Mobile cell and hotspot subscribers can use this to find out specific coverage areas: This is a marvelous tool and one all carriers should emulate. It shows specific levels of expected signal strength for T-Mobile's cellular network--this would help plan for GPRS use as well as voice--and has a checkbox that lets you see T-Mobile's hotspots as well. You don't have to have a T-Mobile account to use it.

Verizon's CEO recently stated that people shouldn't have the expectation that cellular service works everywhere, like in their homes, or have access to detailed information about coverage

areas. The San Francisco Chronicle wrote, "Seidenberg said it's not Verizon's responsibility to correct the misconception by giving out statistics on how often Verizon's service works inside homes or by distributing more detailed coverage maps, showing all the possible dead zones." Apparently T-Mobile thinks otherwise.

(Seidenberg also said that citywide Wi-Fi was the dumbest idea he'd ever heard while his company is preparing bids to build such service for cities.)

I'll also note that while T-Mobile has no good migration path for 3G cell data service in the US--they've got GPRS and some vague ideas about the future--they are the only carrier that owns and operates hotspot locations. SBC contracts their operation out to Wayport, which is fine, but T-Mobile has every reason to try to emphasize their street-level cell and hotspot operations. And to say nyah-nyah to Verizon. [link via Engadget]