Wacky Wi-Fi Products
Cartoon Ethics on Wi-Fi
The Neverending Connection: What If Your BlackBerry Works In Flight?
NASA HQ Plans Wi-Fi by 2017, $655m Budget
Why Am I Always an Edge Case?
Spray Away Those Wireless Wrinkles
Apple's Codependent Problem
You Could Be Reading FlankSpeed Networking News
If There Were a WLAN, It's Dead Now
Penny Arcade on Zune's Wi-Lo-Fi

PC Magazine identifies 10 "wacky" Wi-Fi products, although only a few are truly offbeat: The magazine rounds up items like the Nabaztag from Violet, the Wi-Fi pen, and a Wi-Fi detecting T-shirt and watch. I suppose these are more "ways to spend your cash that aren't truly useful, even though they might be fun." They also include the Eye-Fi, eStarling's picture frame, and a Wi-Fi-enabled remote control from Acoustic Research that are all a bit more practical--still about entertainment, but they actually do something.

Posted by Glenn Fleishman at 9:37 AM | Permanent Link | Categories: Gadgets, Humor | No Comments | No TrackBacks

Another entry in the comic strip dept. on the ethics of borrowing Wi-Fi: On a Claire Day--for my money, one of the smartest new strips out there--sees its youthful, single, female protagonist agonizing today over whether to use the Wi-Fi signal of a neighbor. "I wonder if this is stealing...But I'm not taking anything. Or am I?" She concludes: "Bah, who cares. I've got emails to write."

Posted by Glenn Fleishman at 7:01 AM | Permanent Link | Categories: Humor | No Comments | No TrackBacks

The Neverending Connection: What If Your BlackBerry Works In Flight?

The Associated Press's Anick Jesdanun examines the fear of regaining in-flight connectivity among the jetset: This is a pretty hilarious, almost contrarian article about the reactions some always-on people have about gaining email, BlackBerry, and full Internet access while in flight. Some Type Triple A personalities look forward to more productive work time; others sigh about the last place away from the office getting a cord plugged in.

Another classic from satirical newspaper The Onion: "Griffin was confident that NASA's estimated $655 million plan to install a wireless broadband router by 2017 could reap huge benefits for the entire space agency."

Posted by Glenn Fleishman at 10:17 AM | Permanent Link | Categories: Humor | No Comments | No TrackBacks

Why Am I Always an Edge Case?

Short, personal rant about the vagaries of technology and my position relative to such: I decided to switch DSL providers recently, and chose my incumbent telecom Qwest, which can underprice competitive DSL carriers. I've given in to that notion, as I could have twice the speed for half the cost. The process goes rather well, from ordering online, getting a telephone plus DSL bundled price, and receiving a modem in the mail. Then it goes downhill. That's not unusual for me. I've discovered hitherto unknown bugs in many common pieces of hardware, including the latest Apple AirPort Base Station.

The Qwest modem, which combines DSL handling with a Wi-Fi gateway, seems to work perfectly at first. It's a 2Wire 2700 HG, which turns out to be in the field for about a month. It trains up fine, handles the PPPoA (PPP over ATM) login, and tests show a healthy set of rates close to the raw 3 Mbps/640 Kbps that the modem's reporting. (The service is "up to 7 Mbps," so 3 Mbps is the best it trains to at the moment.)

Things start to go south. The modem stops routing. Every time I connect to it from a browser, it reboots. I call tech support and get the single most knowledgeable tech guy I've ever spoken to. We go through a ton of troubleshooting, all reasonable stuff (not "sir, did you power up the unit?"), and it seems to be back in shape after a factory reset. Then a few minutes later, it all happens again. I call tech support again, and once again get a phenomenally good tech on the phone. He determines it must be a defective unit. We're thinking bad Flash memory or something. He gives me an RMA and has another one shipped out.

Two days later, the new router arrives, I plug it in, and after a little bit of happiness, same thing. Hello, tech support! Another great techie. After some remote testing, and his own ability to restart the router by simply accessing it over their internal network, he's thinking it's a firmware bug that hadn't been uncovered. They're sending me another router so we can make sure it's not two bum units (the behavior is slightly different betwen the two).

The third tech had some suspicion that Apple's Bonjour networking, a form of multicast DNS on a local network, might be involved, as they had a different problem that was equally mysterious with an Actiontec modem model that turned out to be caused by the Bonjour network name of a networked computer having characters in it that the modem couldn't parse.

The third modem showed up today, and I disabled the Wi-Fi gateway entirely. It's working fine with an external access point. I figure I'll get the use of the network over the weekend wait until Monday to see the modem fails when I punch in my regular settings.

Posted by Glenn Fleishman at 7:22 AM | Permanent Link | Categories: Humor | No Comments | No TrackBacks

Spray Away Those Wireless Wrinkles 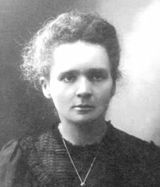 Clarins! Take me away: Cut to scene of woman with skin like Scarlett Johansson lounging in tub, surrounded by cell phones, Wi-Fi gateways, and uranium. "I'm 75, but you would never know it. Until now, I've spent 23 hours each day in a lead-lined bathysphere, miles below the earth to keep my skin silky smooth. But now I have Clarins Expertise 3P, specially formulated to protect me from artificial electromagnetic waves. While I always try to use natural electromagnetic waves, spending days at a time in the Van Allen Belts and consuming a healthy diet of charged particles created by nature, you know that in this modern age, artificial electromagnetism is all around me. Fortunately, Expertise 3P invisibly shields my skin through a formula that's as natural as can be,i including phenooxyethanol, biosaccharide gum-4, and sodium chloride--ordinary salt! So the next time you need to leave your lead-lined chamber and visit the site of a recent nuclear test or just walk under an artificial light, try Clarins Expertise 3P. Only $40 for a 3.4-ounce bottle."

(The science: "When exposed to 900 megahertz waves--the type most commonly used in communications--skin's free radical production increased, its protective barriers deteriorated and cellular renewal slowed by 26%.") [link via Leslie Schroeder, pictured on her all-natural yak]

You Could Be Reading FlankSpeed Networking News

Phil Belanger drops a branding bomb: David Haskin reports that Belanger, a founding member of the Wi-Fi Alliance said that FlankSpeed was one of the names suggested for what was ultimately dubbed Wi-Fi. I have to stop and put my head between my knees. Deep breaths. Okay.

Many moons ago, the company that invented Visio--bought by Microsoft for $1.6b in 2000--was searching for names for its product (and ultimately what it renamed the company). The naming consultants looked at the fact that the program could graph and draw, and came up with...Graw. Thank you! Next! The founders of Visio later formed a startup named The Graw Group as a kind of a joke until they left stealth mode as Trumba.

If There Were a WLAN, It's Dead Now

Airmagnet notes that holiday decorations can disrupt wireless networks: The more popcorn you heat up in the microwave, the more trees you decorate, the more banners you hang...the worse your WLAN performs. [via SmallNetBuilder]

Extra points to any reader who figured out the headline reference. 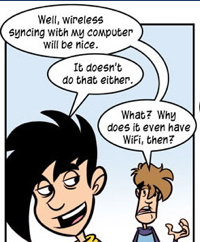 Comic-strip Penny Arcade nails the Zune limitations: As Engadget reported the other day, the Zune player's Wi-Fi will only allow intra-Zune music exchange with limitations. Penny Arcade makes the Funny from this. 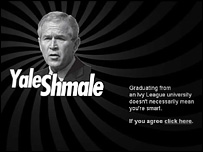 Canadian university mocks president, my alma mater: The Yale, Shmale campaign by Lakehead University does little to restore the luster to an institution, the president of which has banned a campus-wide Wi-Fi network due to unsupported, bad science that he nonetheless believes is prudent to work from. (Despite no epidemiological effects from tens of millions of people living and working in constant proximity to Wi-Fi transmitters. Perhaps we'll all drop dead en masse.)

The Yale, Shmale campaign is also offensive to Yinglish speakers, that blend of Yiddish and English, for appropriating the sing-songy rhyme used to indicate a dismissive attitude. Correct use: A member of the Whiffenpoofs described missing some midterms in order for the long-running campus singing group to perform the national anthem at a World Series game thusly--"Midterms, shmidterms! This is the World Series!"

An excellent prankster who uses Linux offers a way to befuddle those who would use his Wi-Fi network: Through DHCP identification of local computers, he splits traffic among legitimate access and those subjected to torment. He can either redirect everyone to, say, judging kittens, or he can run images through a local filter that turns them upside down or reverses them. Or makes them blurry. [link via BoingBoing] 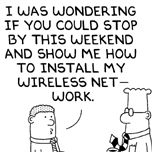 Posted by Glenn Fleishman at 7:36 AM | Permanent Link | Categories: Humor | No Comments

Six Guys with Laptops in Search of Wi-Fi at Chicago 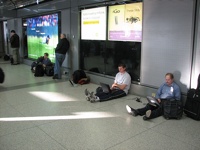 My friend and officemate is in Chicago's O'Hare on route to South Africa to visit relatives: He called me from the airport asking, aren't we in the 21st century? Doesn't ORD have Wi-Fi? No, I laugh at him. Next year, I guffaw. Get a modem, I heckle.

Meanwhile, I'm punching ORD into the JiWire directory, and ask him what terminal he's in. I find him a Delta Crown Room nearby, and shortly thereafter get an instant message: he and five other guys (three pictured) are on the floor with laptops getting a signal through the doorway. Reason enough to get a high-gain Wi-Fi card.

Somebody send this photo to Boston-Logan's CEO!

A column at a CPA site noted that a software developer's conference venue told attendees it would cost $600 for Wi-Fi access for the week of the event: The San Diego Convention Center must have been wearing the wrong hat. Convention exhibitors are typically charged exorbitant rates by incumbent third-party contractors who manage hotel and convention center Internet access. A phone line costs a small fortune; a T-1 line a large fortune. Even Wi-Fi is charged at high rates.

I'm guessing that the San Diego folks gave out the wrong price card for attendees at the Sage Software event, and surely Sage had nothing to do with it. They later offered $4.95 per hour access, which is not as awful, but is ridiculous.

Don't these venues understand that 3G is on the way and even being installed in their venues to boost reception? Don't they know that EVDO, even if slower than a Wi-Fi feed, will typically be used by people who pay for unlimited monthly transfers? Everyone I know would take "no additional charge" and 200 to 400 Kbps downstream over "$4.95 per hour" and 500 Kbps to 1.5 Mbps any time. (The key is downstream: If you need the uplink speed, 3G can't cut it.)

Truck stops in Texas with free Wi-Fi may have to filter content: A Slashdot poster connects the dots in a Texas house bill that would require filtering on any state-provided wireless network on public property. This means the truck stops that have been equipped would need filtering. I don't need to make snickering references here, as you can read plenty on Slashdot.

Posted by Glenn Fleishman at 8:45 AM | Permanent Link | Categories: Humor, Politics | No Comments | No TrackBacks