A couple of reports on the new service Amtrak launched in the Northeast: Amtrak's offering free Wi-Fi in six stations and on the Acela line that runs between Boston and D.C. 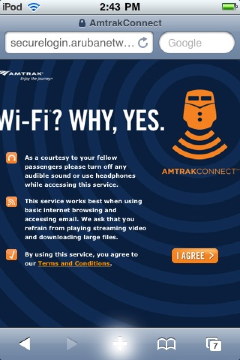 From the Washington Post, Rob Pegoraro runs through some of the details he's found out. On trains, streaming services are blocked, and some content is filtered, without complete disclosure. There's no excuse for avoiding full disclosure. Pegoraro saw rates of 1 Mbps down and 200 Kbps up from the aggregated mobile broadband service.

Nomad Digital's backend is being used, which can take signals from multiple 2G/3G operators to piece together continuous coverage. I imagine the firm uses a virtual network that uses proxies on both ends to allow a continuous IP connection regardless of the intervening network pieces. The user has no awareness of this, and remote sites maintain connections via the proxies.

A report from Canada's Globe & Mail indicates that Via Rail's Internet service could use more robustness, where cellular doesn't fully cut it. The firm that operates Via, 21net, only uses cellular connections on the Windsor-to-Quebec City route over which Internet is available. That's what the train operator wants. 21net recommends adding satellite for reliability.

Posted by Glenn Fleishman at 10:38 AM | Categories: Rails | No Comments