Clearwire says it's on track for 120m people passed in 2010; beyond that, more money needed: paidContent.org runs down Clearwire's earnings news, with the firm bringing in $80m in revenue, but a loss of nearly $100m. Subscribers stand at 688,000. The company will spend about $3b in 2010 to get to its target of 120m people to whom service would be available. But if the network is to grow any bigger, more cash is needed.

In contrast, T-Mobile has crossed 200m already in upgrading its 2G network to add 3G, and it's ostensibly on track to something approaching AT&T (233m) or Verizon (280m) levels. (Yes, those Christmas ads in which Verizon said it has the biggest 3G coverage are correctly, but the 50m gap is in small towns; AT&T has the big markets.)

Clearwire is leaning on Sprint for its fallback position, Sprint being the majority owner of Clearwire. If you get a combo 3G/4G USB modem or portable 3G/4G-to-Wi-Fi gateway, you can use 3G (up to 5 GB on Sprint's network) when away from a Clearwire area, and 4G in the footprint.

But Sprint has underspent on 3G. The company reports (the latest number I could find) 270m people passed with 3G with roaming. That's a critical point. Compare Verizon's native coverage map with Sprint's map, where Sprint shows gray for roaming, orange for 3G and tan for 2G: 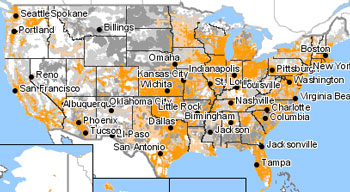 And here's Verizon's, where dark blue is 3G, green is 2G, and yellowish is roaming: 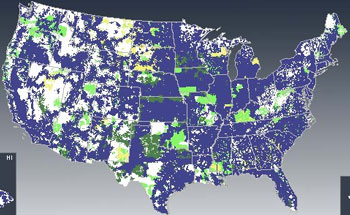 Sprint has the big cities, sure, but it doesn't disclose its non-roaming footprint, and it limits 3G customers to no more than 300 MB per month of roaming data, after which point it can choose to cancel a mobile broadband contract.