My recent trip to San Francisco for Apple's iPad launch gave me some hands-on time with Gogo Inflight Internet: Despite writing about in-flight Internet for nearly nine years, I have rarely had the chance to experience it. My heavy flying days--tens of thousands of air miles a year--ended back with the dotcom boom in 2001. I flew a Connexion by Boeing test flight in 2004 with other reporters out of Seattle's Boeing Field that didn't even use the production flavor of that service; and I was on board Virgin America's launch of Wi-Fi in 2008. Other than that, nada! 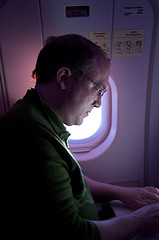 So it was rather exciting to be able to have a real-world experience with Aircell's Gogo on the way down and back to San Francisco--even better, I was able to snag seats in an empty exit row on the way down and had an empty middle on the way back. The flights are 100 minutes in the air, with perhaps 80 to 85 of those above 10,000 feet. I had previously set up an account with Gogo, something Aircell advises because it removes the friction in the air from starting up a session. You can store a credit card for billing as part of account setup.

Connecting to the network was no trouble for me, but my colleague Jeff Carlson couldn't initially pull up the redirection hotspot page. We checked his settings, and found he had hard-coded his DNS servers to OpenDNS. This is a good idea in general--faster DNS, phishing protection, and search result redirection--but it causes trouble when there's a hotspot redirection page. He removed his DNS server settings and then got the splash page.

Setting up a session is straightforward: you choose a plan, such as a day or month pass, and then pay for it. We had complimentary codes, and entered those in the checkout stage. 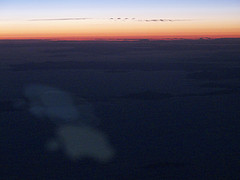 Service was reliable and consistent for nearly the whole way down and back. I used the Web, Dropbox, an RSS reader, email, screen sharing (VNC), Twitter, iChat, and other services and protocols without any problems. A test at one point during one flight of bandwidth showed precisely 256 Kbps of downstream (Internet to me) and about 300 Kbps upstream (me to the Internet). The service is clearly throttled and provisioned, and the exact 256 Kbps (two to the eighth power) figure shows perhaps how precisely so. Gogo has about 3 Mbps of raw bandwidth to divvy up.

It was definitely both useful and a pleasure to have Internet access nearly continuously during this particular trip. Jeff and I were trying to stay up to speed and get prepped on the way down, and then were writing and posting material at the Apple event venue, at a Starbucks afterwards, at SFO, and then from the plane itself. I rarely have to keep a constant stream of activity like that, but I work for myself.

Jeff and I conferred about the price. If were paying for it, we likely would not have paid the $9.95 for the SEA-SFO leg, because we could have read a book or slept. It was useful, but not critical. The ten bucks for the SFO-SEA would have been a no brainer, as we had plenty of work to do on that flight.

Now if only the people in the seats in front of Jeff and I hadn't leaned back so far we could barely open our laptop covers. Perhaps the iPad will solve that problem.

(Disclosure: Aircell gave me free codes to use to test the service on these flights, but this post is not sponsored, nor did Aircell see this post or have any input into it. I paid the listed fare for the flight. As you can tell from other articles on this site about Aircell and Gogo, I don't pull my punches.)

I use OpenDNS (obvy) and I've never had issue on GoGo... perhaps it was some other setting?

In fact, I used it yesterday on a Virgin Flight, both before and after signing in.

Glenn Fleishman replied to comment from blog.david.ulevitch.com | February 6, 2010 8:44 AM | Reply

That's fascinating. It was clearly a DNS issue; we changed the settings, and that was the only change made, and then all was well.

The concern about trouble from cell phones has to do with the potentially high signal levels that cell phones will use when they cannot contact a cell base station, coupled with out-of-band emissions. On some planes, this may cause some interaction with avionics hardware, but there's been very little practical proof of this.

Further, a study done a couple of years ago with the cooperation of the FAA and major airlines found that there is always at least one cell phone left inadvertently turned on (and often many) on every flight that was tested. This would indicate that cell phones cause far less trouble than had been suspected.

However, older airplanes have less shielding against RF radiation, and it may be that particular models have greater trouble.

Wi-Fi uses very low power signals, and as a result, there's nearly no possibility of it causing the sort of interference that might cause pilots' trouble.