Apple's October revision to its AirPort Extreme Base Station and Time Capsule lets these units run at up to 450 Mbps, 50 percent faster: I knew that Apple had put a 3x3 antenna array into these devices, which could be argued was intended to improve speed-over-range, a common reason to add antennas. (Read the background in my 20 October 2009 article, "Apple Slipstreams 3x3 into Wi-Fi Base Stations.")

But I had heard that Apple had built three streams in, making these devices capable of a raw 450 Mbps operation, or 50 percent faster than nearly everything else on the market. Each stream in 802.11n can carry more data than 802.11g--more than twice as much, in fact, when wide (40 MHz) channels are used. Apple makes wide channels available only in 5 GHz, which isn't unusual; 2.4 GHz is quite crowded and full of competing uses. Thus 450 Mbps is the raw rate in 5 GHz, 225 Mbps in 2.4 GHz.

How do I know this when Apple won't reply to calls and emails on the topic? I was tipped to it by several wireless industry folks who wanted to remain anonymous--nobody likes to offend Apple--but didn't have a definitive label until today. 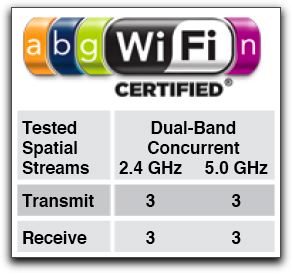 I regularly check the Wi-Fi Alliance's site for new certifications from Apple, because more information often appears there than the details Apple provides. Sure enough, based on a query from a colleague tonight, I did a search and found that on 3 December 2009, Apple's two Wi-Fi gateways had been labeled with three-stream support for transmit and receive in 2.4 GHz and 5 GHz.

[Update: The inestimable Tim Higgins of SmallNetBuilder wrote in to note that he had discovered, disassembled, and documented all this a month ago! I'm sorry to have missed it. Read his article in which he also found that Apple had connected a couple of antennas incorrectly. He confirms that it's a Marvell radio; Marvell started shipping three-stream chips nearly two years ago.]

This aggregate of 675 Mbps of raw data (something closer to 400 Mbps of TCP/IP and over 300 Mbps of net throughput) between the two simultaneously available bands is still theoretical: Apple's and most manufacturers' Wi-Fi adapters still are only sport 2x2 antenna arrays with two-stream configurations. (Apple updated its AirPort Extreme certification on 30 November to reach full 802.11n compatibility, too, but only for two streams.)

It's already been asked, but gear from before October with 2x2 arrays cannot be updated to 3x3; it's a hardware change, as is the jump from two streams to three streams.

In the short run, Apple base station buyers will get the benefit of greater range and greater speed over short ranges than with older gear. In the long run, though, there's a big speed boost to come.

Thanks in advance for helping me with this.

If you turn off backwards compatibility, then I believe you have a potential raw data rate of 225 Mbps.