From a carrier with no 3G offerings 18 months ago, T-Mobile has turned the ship fast--and turned the table on its competitors: T-Mobile used today's announcement of a new 3G USB modem to lay out its aggressive plans for 7.2 Mbps HSPA and 21 Mbps HSPA+ deployment nationwide.

Starting from no customers in second quarter 2008 and clutching a handful of 3G spectrum, the firm now covers 240 cities and passes 170m people. T-Mobile's Jeremy Korst, director of broadband products and services, said in an interview that the number will hit 200m by the end of 2009, which covers nearly all the major urban areas. By contrast, Clearwire plans coverage of 120m people with its Wimax service by the end of 2010.

But perhaps more important is that T-Mobile will have 7.2 HSPA, which runs at a raw downstream data rate of 7.2 Mbps, on all its 3G nodes by year's end. On the upstream side, T-Mobile will gradually upgrade to 2 Mbps starting in early 2010.

This contrasts with AT&T's previously announced but much more moderately paced plan that gradually upgrades the current, seemingly overloaded 3.6 HSPA network to 7.2 HSPA through the end of 2011, at which point AT&T will still have only 90-percent 7.2 HSPA on its 3G network. By the end of 2010, only 25 of 30 major markets will have the faster HSPA flavor, the company has said.

The bigger news, though, is that T-Mobile is going full-court press on HSPA+, a 21 Mbps flavor already deployed by several carriers worldwide, and which T-Mobile launched for test purposes in Philadelphia in September. The company will start rolling out HSPA+ in 2010 on a "fairly broad-scale" basis, Korst said.

I believed from my reading and interviews that HSPA+ would require MIMO antennas and other upgrades. However, Korst politely disabused me of that. He said that HSPA+ is a "relatively low-cost and relatively easy upgrade." The real challenge, as with most carriers improved 3G and 4G networks, is backhaul, and Korst said, "we're making some major investments in backhaul connectivity."

T-Mobile is taking advantage of AT&T and Verizon Wireless's focus on LTE, the fourth-generation (4G) standard that the two firms have and will put tens of billions of dollars behind to achieve, and which requires an entirely new rollout of base station gear. AT&T won't have LTE ready to go in production markets until 2011. Verizon will be deploying LTE starting this year, with 30 markets and 100m people covered planned for 2010, but that still provides a lot of lag.

Sprint's 4G fortunes are tied to Clearwire, of which Sprint remains a majority owner even after yesterday's announcement of an infusion of an additional $1.5b in capital. WiMax has the potential for faster speeds than 7.2 Mbps HSPA, but not by much, especially after T-Mobile completes its upstream updates.

HSPA+ has significant limitations on its upper bounds, but doesn't require broader frequency channels as does LTE. LTE has more advanced methods of provisioning service, and more potential for higher rates, but at the outset, HSPA+ and LTE will certainly appear quite competitive. T-Mobile and Clearwire will both likely have a head start on offering the fastest mobile broadband speeds over a broader population base for at least a couple of years.

Regarding T-Mobile's move into HSPA+ relative to other carriers' plans, Korst said, "We like to upset that apple cart." 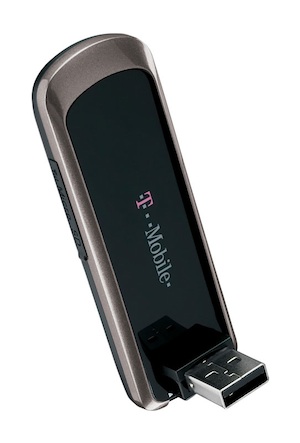 Now, to today's announcement: T-Mobile has added a second USB broadband modem, the webConnect Jet. With a 2-year contract, the Jet will cost nothing, and it's already wired for 7.2/2.0 Mbps HSPA. The Jet works from GSM up to HSPA on T-Mobile's US network, and EDGE outside the U.S.

The previously released webConnect USB Laptop Stick includes worldwide 3G capability and a GPS chip (not yet activated for service), and is $50 with a 2-year contract. It also handles the new HSPA flavors. Both USB modems support microSD cards of up to 8 GB.

T-Mobile already has other HSPA devices on the market that are ready to go with 7.2 Mbps as well. This includes the myTouch 3G, Motorola Cliq, G1, TouchPro 2, and Dash 3G. Outside of the iPhone 3GS, it's unclear which AT&T phones and laptop cards - except for a recently announced USB modem - will have 7.2 HSPA capability, as the timeline is much further out for AT&T.

While pricing has remained relatively static for 3G laptop and netbook subscriptions, T-Mobile is throwing some oil on that fire, too. With a seasonal discount for a contracted term. Normally, T-Mobile charges roughly what it's competitors do: $35/mo. for 200 MB of data use and $60/mo. for 5 GB of data usage. (T-Mobile charges, like others, $200/GB for overages, billed by the megabyte.)

Until mid-January, however, new contracts for 200 MB/mo are $30/mo, and 5 GB/mo are $50/mo. This may be the beginning of a minor price war, as it's the first real break in the $60/mo. price that became typical a couple of years ago (down from $80/mo. for unbundled plans before that).

Unusually for a cell carrier, these same discounted rates are available on a month-to-month basis without a contract, requiring a full-price purchase of the USB modem: $250 for the worldwide 3G model, and $150 for the new Jet. This is gradually becoming more typical, with carriers testing out on-demand use, day rates, and other ways to get more casual mobile broadband revenue.

It's also worth mentioning that T-Mobile has two separate home calling options tied into voice accounts: its long-running UMA (unlicensed mobile access) service that uses dual-mode handsets for calling over Wi-Fi or cell networks; and a land-line substitute service that provides unlimited VoIP from standard home phones through a special router.

While T-Mobile's moves on the data side may be striking, the company is still the distant fourth among peers in terms of subscribers. However, these moves may make the heaviest data users and biggest spenders more likely to switch to T-Mobile if they need faster speeds on the go, and even a slight discount.

T-Mobile currently has the fastest Network in the Houston area.

Tried the Droid, the Eris from Verizon.. average speed 880Kbps

Dont have a measure for sprint,

Latency is fastest with Verizon.

And now this good news...

I'm sticking with my G1 until an Android device that can use this new bandwidth arrives.