Apple unleashes Mac OS X 10.6 Snow Leopard reviewers: While the next release of Mac OS X doesn't appear til Friday, Apple ended its embargo for reviewers and others who gained early access to the operating system update.

There are three notable changes related to Wi-Fi, none of them terribly significant.

First, the AirPort menu--the place from which you select networks--now shows signal strength for each nearby network. That's useful if you have choices or are troubleshooting coverage. Hold down the Option key before clicking the AirPort menu and Apple now reveals more information than the same option in Leopard, including channel, band, transmit rate, and the obscure MCS Index (an entry that defines encoding choices in use). 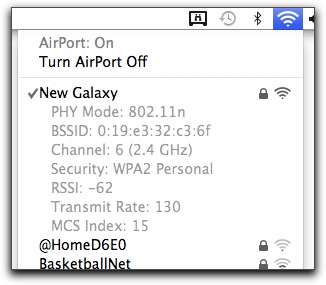 Second, the sleep mode in Snow Leopard is integrated with Bonjour discovery, the network protocol Apple uses to advertise services available on a computer. For Mac models released in 2009 (as far as I can tell), you can wake a computer remotely by connecting to a service like file sharing over Wi-Fi or Ethernet--so long as the Mac was connected to an AirPort Extreme Base Station or Time Capsule before it went to sleep. The base station acts as a proxy while the Mac is sleeping. (Macs from 2008 and before appear to only have the option to be woken over Ethernet.) You can read about all the details in an article I wrote this morning for the Mac publication TidBITS, AirPort Menu Improves in Snow Leopard.

Third and finally, you can have your current location and time set in the world via Wi-Fi. The Date & Time preference pane's Time Zone view has an option to set the time zone via the current location. This requires an active network connection, and almost certainly uses Skyhook Wireless data, as Apple already relies on that firm for iPhone Wi-Fi lookups.

Snow Leopard has a $30 price tag for those with Leopard installed; $170 for a bundle of Snow Leopard, iWork '09, and iLife '09 for Tiger users. However, the $30 updater will work with Tiger, too; it violates the user agreement, but Apple uses the honor system for enforcement since it already collected its profit margin when it sold you the computer.

Posted by Glenn Fleishman at 8:13 PM | Categories: Software | No Comments | No TrackBacks