Leaks reported from some reasonably accurate sources say that 802.11n might be built into the next model of iPhone, along with chips to support the 7.2 Mbps HSPA flavor to which AT&T is currently upgrading its 3G network.

Could it be? Sure. But is it useful? Not so much yet. 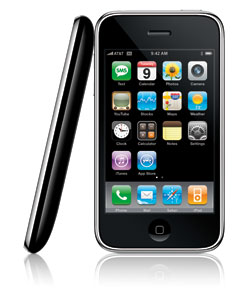 That's fine for laptops, desktops, and routers, but it's hard to cram that much radio technology into a battery-powered mobile device without making the time between charges unusably brief.

Meanwhile, chipmakers keep shipping hundreds of millions of commodity 802.11g chips, which they make no real money from, and which they have no interest in improving processes for.

That's where single-stream 802.11n comes in. With single-stream 802.11n, only a single radio and single antenna are used. This may seem odd to cut out most of the advantages of the standard - lurching its way to a 2010 ratification, by the way - but single stream still offers quite a lot.

The 802.11g encoding is 54 Mbps (raw throughput) or mid-20 Mbps of real throughput, while 802.11n's single stream encoding is 65 Mbps, where 30 to 50 Mbps of throughput is possible. So you lose wide channels, antenna diversity, and multiple streams, but could gain 50 percent or more in net throughput.

This may not seem like enough to retool mobile devices around, but there's a compelling reason for manufacturers. Chipmakers are developing 802.11n actively, working for continued power savings, building chips on smaller and smaller dies, and driving more Wi-Fi standards into the chip. This all means better performance and longer battery life for devices built around the chips.

Now, the reason I said "not so much" is that the current generation of mobile devices lacks enough processing oompf and optimization to take full advantage of a faster Wi-Fi connection. When Steve Jobs claimed last June that the iPhone 3G approached Wi-Fi's speed, he was talking about the perceived speed to the user.

Obviously, a 1.5 Mbps downstream 3G connection isn't as fast as a 25 Mbps WLAN connection (backhauled by, say, 50 Mbps cable data service). But the iPhone 3G can't keep up with a speed faster than the fastest 3G. You can check this out, as I have, by loading the same pages on a 3G network and on a far-faster broadband network over Wi-Fi. (Of course, plain file transfers work faster on an iPhone than rendering a Web page.)

What chipmakers have told me is that single-stream 802.11n comes into play when you have mobile devices that need to load and offload huge amounts of content. The iPhone can load 1 GB movie files, for instance, but USB is the only route. If you could move 1 GB in a couple of minutes over 802.11n, then Wi-Fi becomes a reasonable sync conduit. (USB 2.0's 480 Mbps speed is also limited by a smartphone's processor, of course.)

Smartphones or cameras that produce large pictures and video files need an efficient way to transfer them off. Having the mobile device manage the transfer and accomplish it in rapid bursts makes a lot of sense rather than having to fiddle with iTunes or sync software on a USB-connected computer. Using the mobile device as its own conduit gets you back into the cloud, too, using the Internet as a storage and processing mechanism with no intermediary.

The growth of fast home broadband--I just moved from an effective 1 Mbps DSL line to a 12 to 25 Mbps cable modem service--means that mobile devices need more throughput to be truly untethered. Single-stream 802.11n could be part of that.

So, again, would the iPhone benefit from single-stream 802.11n? Sure it would--but it has to be paired with an improvement in the iPhone's fundamental processing abilities to take advantage of the potential for far greater speeds.

Thank you, Glenn. Always nice to get more details about the real factors involved. Processing power will always be the issue with handhelds fighting for battery life, at least until "fine-matrix" or whatever the next-generation lithium-ion battery technology is called, cells can offer higher sustained voltage for longer.

I'm looking forward to seeing what they've come up with, hoping new hardware will be ready before Applecare ends on my Original iPhone.

One real benefit for 802.11n based iPhone-type devices is people are one step closer to ditching the 2.5GHz band for wifi. They can move their entire network to 5 GHz. Of course with dual band routers this is less of a concern now.

This is all fine and good, but there are some of us facing restricted bandwidth caps and costly overage charges for broadband Internet access in the coming months. This is exactly what is happening in my area, one of the five singled out by Time Warner Cable for metered Internet access.

It seems clear that TWC is suggesting cell phone plan analogy to the media, because all the news stories are using the same analogy in every story.

Anyway, anything that increases the speed of a device is welcome — but then when the device hits the Internet (for cloud services), rather than a local (especially home) network, it is going to run smack up against this costly trend. I have a feeling a lot more people are going to care about this in the future if metered access takes off. I'm seriously reconsidering all sorts of services, and OTA sync would be one of them I might not need.

Who cares about the speed if you end up paying more for what you download?