Clearwire unveiled the Clear Spot Personal Hotspot: Yes, the firm needs help with naming, but it's a great idea to push early adoption outside the home. The CradlePoint-developed device is a WiMax-to-Wi-Fi gateway designed for nomadic use due to its built-in battery. Plug in a Clear USB modem, and you're good to go over 802.11b and 802.11g wherever. The device will retail for $139; the USB modem costs $49 and can be used on a pay-as-you-go basis ($10 per day) or with monthly mobile subscriptions. It will be available in Clear markets in mid-April.

The Clear Spot appears to be a rebranded version of CradlePoint's PHS300, which has a built-in lithium-ion battery and can be recharged via or used with an AC adapter. The PHS300 works with a variety of cell modems and lists for $179.99. 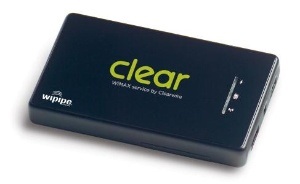 This is an extremely smart move on Clearwire's part because it signals two things: The company knows that it'll take a while to develop an ecosystem of WiMax-enabled devices; and it wants customers to use its network extensively instead of imposing lots of limits.

If Clearwire can deliver on its top download speeds (4 Mbps with mobile gear), that's a big bump up from the 600 Kbps to 1.7 Mbps downstream rate promised by various 3G carriers. Of course, AT&T is aiming to double its speed through what's described as a software upgrade (to 7.2 Mbps HSPA), and Clearwire suffers from 384 Kbps upload speeds which now compares unfavorably with even 3.6 Mbps HSPA and EVDO Rev. A.

Clearwire has an advantage on mobile data limits, however, because the company apparently believes it has such a big pool and such a large spectrum swath that it can offer an unlimited plan. Whenever I've asked Clearwire what unlimited means, the firm says, really, unlimited. It'll shut down abusers, but it will apparently look at patterns, not quantity.

The Clear service has an unlimited mobile offering for $50/month with no commitment; contracts and bundle discounts drop the price to $40/month and waive a $35 activation fee. A 200 MB per month plan is an appalling $30/month, but likely targeted as a bundle for home users where it's heavily discounted. A more moderate $40/month 2 GB usage plan can be bundled, too; each additional GB is $10 in a calendar month.

Businesses pay on a different scale that offers a better deal but more "risk" of overages, too. An account is priced with two devices (included) under a 2-year contract, with 15 GB/month for $100/month up to 30 GB/month for $150/month. Additional GB are $10 each.