Option offers up another cell gateway: The GlobeSurfer III is the latest release from Option for a cellular gateway, in this case featuring the fastest HSPA flavors. The device seems unique in offering networked support for those connected via Wi-Fi and Ethernet to USB hard drives and printers. The GlobeSurfer III also handles SMS messaging. With all these features, there's no battery-only option, which is becoming a common feature among simpler wireless WAN gateways. 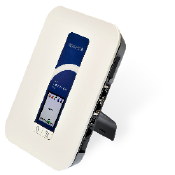 T-Mobile disembarks Amtrak: No press release was sent, but our eagle-eyed informal correspondent Klaus Ernst once again spots the lacuna. He was unable to find T-Mobile service at Penn Station in New York City, contacted T-Mobile customer support, and was told that the service was no longer available. T-Mobile offered Wi-Fi in five Northeast corridor stations; Amtrak still lists them as their provider. A T-Mobile spokesperson didn't respond for comment (yet), and a perusal of the company's hotspot listings show no Amtrak stations. T-Mobile was the third provider to operate this service: Ernst notes Pronto/Urbanhotspots was once a provider, then AT&T Wireless ran the service (prior to the Cingular acquisition), and finally T-Mobile. One would think that with a captive audience often waiting Wi-Fi would be a big seller. Apparently not.

We're No. 1! We're No. 1! Whatever! Forbes has released its annual nonsensical top 30 wired cities report, which, of course, includes wireless services like public Wi-Fi hotspots and Clearwire's pre-WiMax and true WiMax. The methodology is ridiculous. They're measuring percentage of homes with "high-speed connections," without showing a historgram or other data about speeds, counting Wi-Fi hotspots, and looking at the sheer number (not scope) of broadband providers. Seattle comes in at No. 1, for whatever that's worth.