Novatel Wireless has introduced a sleek mobile 3G router that's seemingly far more than its competition: The MiFi is a cellular router due out in the first quarter of 2009, with pricing not yet disclosed. While there are several competitors on the market, notably from Junxion, a firm acquired by Sierra Wireless earlier this year, Novatel claims some unique qualities. The MiFi will have an internal battery that can offer 3G to Wi-Fi bridging for up to 4 hours of use and 40 hours of standby.

The slim unit appears to be designed around an integral card that's not removable, which is a departure from most similar designs, which allow interchangeable cards supplied by an integrator or an end-user. Novatel hasn't yet said what technology will be inside, but it's easier to see both EVDO Rev. A and HSPA versions with slots for inserting the necessary authentication card.

Novatel also says it will differentiate the MiFi by allowing third-party applications to run on the system, and supporting external storage with a microSD slot that can handle formats up to 8 GB. That means that the MiFi could act as a caching Web server, a store-and-forward mail server, a VPN end point, and other purposes as well. 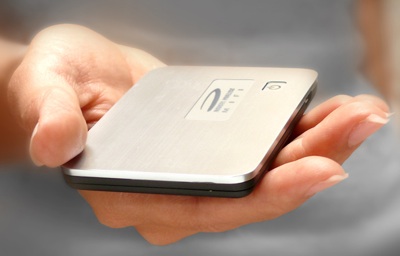