Virgin America has formally announced their in-flight Internet launch and plans: Virgin put out the news a few weeks ago that they'd have a press event flight on 22-November to show off their in-flight Wi-Fi with GoGo (AirCell's branded service). They're now formally noting that service will start for all flyers on a single aircraft 24-November, and expand to their entire fleet by second quarter 2009. Earlier reports indicated the airline would equip about one plane per week, which probably conforms to overnight maintenance schedules for their fairly new planes.

Virgin America goes quite a bit beyond other airlines in the electronic amenity department. They have an advanced seat-back system that includes in-flight chat (currently intra-plane, soon across the fleet as Internet access is added); it's gotten rave reviews. They also have power available at every seat, which is an easy choice to make when you're building planes for today's passengers. 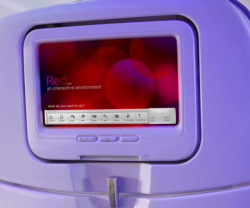 I'll be on the press event flight, covering it for a few publications including this fine site, and will try to blog from the air just for the fun of it. If you can blog from the top of mountain, it seems necessary to do so. (Disclosure: I'm paying for all my expense associated with getting to and from the press event.)

Virgin America is the only airline worldwide that's committed to putting Internet service on all its planes, although it has a fairly small fleet. (Planespotters has the full list of 27, including their names, such as the BoingBoing-plumed Unicorn Chaser.)

For a mainstream media article I'm writing, I'd love to hear the experience of anyone who has used American Airlines' GoGo service, which has been in operational on long-haul 767-200s for the last few months. (Email me at news@wifinetnews.com.)

Posted by Glenn Fleishman at 10:19 AM | Categories: Air Travel