The Wi-Fi sharing digital memory card Eye-Fi adds another option for its product line: If you've purchased or plan to purchase an Eye-Fi, starting 5-Oct-2008, you can upgrade the model of card you purchased by paying a yearly subscription fee. This provides more of a try-and-see mode for Eye-Fi's slightly more expensive offerings.

Eye-Fi divided its Wi-Fi SD card line-up into three parts earlier in the year: Home, which transfers to a computer ($80); Share, which uploads to a computer and to Eye-Fi's servers, which relay them to gallery, print, and social services ($100); and Explore, which ties in Wi-Fi positioning and one year of a Wayport hotspot subscription for uploads ($130). I wrote a long review of the Eye-Fi Explore on 12-Aug-2008. 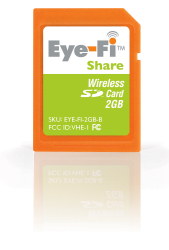 If you bought a Home, you can upgrade to the Share service for $10 per year, and if you bought either a Home or Share, you can add geotagging for $15 per year and hotspot access for $15 per year. It's a smart move, since original Eye-Fi card buyers already had a firmware upgrade that converted their card into a Share model; they'll now be able upgrade to the full featureset. This is something I thought the company was offering at launch months ago, and I speculated it would be easy to add.

Eye-Fi also added two new photo sharing services: Apple's MobileMe and AdoramaPix. I cannot think of any other firm that Apple has partnered with to allow direct MobileMe uploads, although this may be technically less a big deal than it sounds. But I believe it's unique--only the iPhone and iPhoto software can transfers images into MobileMe's galleries; I'll need to investigate further. It's a good feather in Eye-Fi's cap.

Finally, Eye-Fi says they'll release tweaked firmware on 5-Oct as well that will double the speed of photo transfers from their cards to a computer on the local network.