« Mobile Post: MyLoki and My Location | Main | 700 MHz Auction Comes to Close; Winners Not Yet Announced »

Apple isn't the only firm to offer inexpensive 802.11n, but their revised AirPort Express has a few extras: You can buy Draft N from other companies for under $100, but I'd point out that the new AirPort Express compact base station differs from those items. The new model, announced yesterday, is nearly identical to the one that Apple's been selling since 2004. Unlike other inexpensive N base stations, it has a USB port to share one printer (Windows/Mac OS X), an audio output port for streaming from iTunes or via Rogue Amoeba's AirFoil (Mac/Windows, analog/digital optical), and is dual band, supporting 2.4 GHz and 5 GHz 802.11a, b, g, and n. 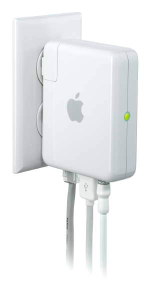 The base station is compact, small enough for travel, with an integral 2-prong plug that can be directly hung from a wall socket, or removed to replace with a several-foot-long 3-prong cord; the extension cord is part of a $39 audio extension kit, and not sold separately from that kit.

While Linksys, D-Link, and others have sub-$100 802.11n base stations, there are differences. The main one is a detriment to the AirPort Express: it has just a single 10/100 Mbps Ethernet jack. That means it's appropriate to directly connect to a larger network via Ethernet, where addresses are assigned out by another part of the network, or it can be plugged directly into a broadband modem and assign addresses out via DHCP and NAT (or a pool of routable addresses).

The Linksys WRT100 (about $80) isn't Wi-Fi certified (yet) for Draft N, while the D-Link DIR-615 (about $60) is, as is the AirPort Express (although the Express isn't yet listed in the Wi-Fi Alliance's database). Both the Linksys and D-Link units have 4-port 10/100 Mbps Ethernet switches along with a 10/100 Mbps WAN Ethernet port. Both are single-band (2.4 GHz), omit USB sharing, and have no audio streaming. (If you know of better sub-$100 models to compare the AirPort Express to, drop a note in the comments.)

It's worth calling out Airfoil, mentioned above, a package from Rogue Amoeba for Mac OS X and Windows that lets you manage where audio goes over your network. Using Airfoil and its included Airfoil Speakers software, you can choose to play audio on one computer and target it to other computers on your network, as well as AirPort Express base stations and the Apple TV media adapter (using Apple's AirTunes streaming protocol). Without Airfoil, you're limited to iTunes streaming under Mac OS X and Windows to an AirPort Express or Apple TV.

I've written a book about 802.11n and Apple's AirPort networking, Take Control of Your 802.11n AirPort Extreme Network, that covers all the issues in setting up secure networks using both Macs and Windows XP/Vista. You can buy the title with at a 30-percent discount ($7 instead of $10) by following the link or using coupon code CPN71005WNN at checkout.

Glenn, do you know what the story is with the limitations on the AirPort Express? Apple's site says it can share internet access among 10 users - why so few? I can see uses for the AirPort Express (taking it along to an off-site meeting for shared WiFi) where that could put a damper on things.

Also, it can extend WiFi networks (acting as a repeater), but only in conjunction with the AirPort Extreme or another Express.

[Editor's note: I believe that 10 is a recommendation, not a hard limit. The processor is the limiting factr. -gf]

Regarding the 10-user limit and the Express' low-end CPU, doesn't that significantly impact your analysis when comparing this unit to the Linksys which has no such limitation?

[Editor's note: Apple hasn't hard-coded that limit in. Rather, it's a recommendation based on the processing power and capabilities. The Linksys and D-Link units are likely capable in the same range, but the manufacturers chose to not provide guidance on the maximum simultaneous users. -gf]