Meraki Networks raises $20m in additional funds, spends a small portion on providing free Wi-Fi across San Francisco: Meraki, founded by MIT students, funded by Google, Sequoia Capital, and others, will expand its current 2 sq mi mesh Wi-Fi network in San Francisco across the whole city. Meraki will foot the backhaul bill and pay for equipment--but it won't pay for real estate. The city will help publicize the network, but I haven't read anything concrete about the city's plans. (Read good local coverage in the San Francisco Chronicle.)

The clever bit here, and how Meraki may succeed where EarthLink failed, is that the firm is relying on individuals and businesses to choose to opt in, site equipment, and take advantage of the network working better for everyone because they participate (paging Ayn Rand). Meraki plans to offer solar-powered outdoor nodes for extending the network's reach, which means potential locations don't have to provide electricity on rooftops or elsewhere, which in turn means fewer or no layers of approval from anyone in authority (whether a neighborhood association, landlord, or the city). "It's relatively easy to install on private rooftops," said Meraki CEO and co-founder Sanjit Biswas in a briefing earlier today.

In the process, Meraki gets a city-wide testbed for local search, local ads, and new technology. "The great thing about having a real-world testbed is you can see the performance," Biswas said. Meraki is testing advertising now, but Biswas says it's "very much in the test mode."

While Biswas didn't disclose any of the costs of building the city-wide San Francisco network or its recurring bandwidth bill for backhaul--he told the AP "a few million"--the math works for Meraki. Giving away 10,000 to 15,000 nodes that cost them as little as $25 assembled for  indoor nodes and a few hundred for outdoor nodes with solar  chargers and batteries doesn't add up to a lot. They don't have to negotiate pole rates, handle installation, or pay recurring venue fees. Bandwidth is relatively cheap if you can choose the points at which you inject it, which Meraki will be able to do. Update: I misunderstood the backbone part. Meraki will, in fact, install some hundreds of solar-powered outdoor nodes to run the backhaul; but they'll still be working with people to find those locations rather than securing those rooftops themselves.

Meraki has learned quite a lot about the real world, Biswas said, with their current San Francisco network, having identified 20,000 interferers--other devices within range and frequency of Meraki nodes--within the 2 sq mi area. Meraki nodes use a centralized intelligence to control routing, as well as a modification to Wi-Fi that doesn't affect end users' ability to connect, but does allow clusters of routers to act dynamically as a unit. 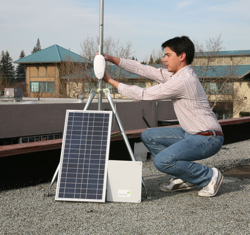 With unmodified mesh Wi-Fi networks, all devices within range of one another and on the same channel act in concert, reducing flexibility and throughput; smaller clusters produce better results. Further, most of the metro-scale Wi-Fi devices sold by Tropos and others are designed to put out the highest possible power output; Meraki uses generally low-power equipment. It's ants versus elephants, with ants being able to change course a bit more quickly. "It's kind of a brains over brawns approach. It's really because we have so many radios," said Biswas, that their network is more flexible. "We can set routes and load balance appropriately to get the maximum performance out of the network," Biswas said.

The current San Francisco network has seen 40,000 unique devices so far--there's no registration, so each unique adapter number is counted--and moved over 10 terabytes of data. Of those 40,000 devices, 1,000 were iPhones.

Biswas said that Meraki has discovered its biggest market may be developing countries where there's an established user base for the Internet that's limited to dial up or slow-speed broadband, and where carriers could deploy Meraki gear to get around non-existent copper infrastructure.

"A lot of our largest customers are carriers that are entering markets in Brazil and India," he said. "We're not at this point going after the most remote villages in the world; there are some very dense populations who...would love to use broadband but just can't get it."

This is good news, if this deployment doesn't get bogged down in San Francisco politics. I like the idea of using outdoor, solar-powered nodes for backhaul. I still wonder if backhaul could utilize the 802.11a spec, since the 5GHz spectrum seems to be relatively uncrowded (overwhelming sales of g/n equipment with respect to a).

Good luck to them. I hope they can succeed where the marketing power of Google/Earthlink failed. I think part of the reason for the collapse of the combined powers was that the Mayor did an end-run around the Board of Supervisors in drafting and approving the contract.

This shouldn't be a problem for Meraki, but they may be opening a whole new can of worms by seeking approval at the roof-top level. Well, chances are a small company like Meraki will be seen as more friendly to the local San Francisco DIY Wifi base, as opposed to the mega-corps.

I think the sticking point will be privacy. How will location-based services be used to track users? Will Meraki use aggregate data to attract advertisers, or will they go with the Orwellian model? I would like to see any company move into this space, frankly, just to see AT&T and Comcast sweat.

[Editor's note: They're not seeking approval at the rooftop level: Each participant in the network who wants a node on a rooftop will have their own issues. If they own the building, they can let Meraki put a node there. If they're a tenant, they may need landlord approval.

Although various FCC rules might require that landlords give permission since the FCC has clearly stated tenants can't be restricted in their use of unlicensed spectrum, but neither is it clear that landlords must provide mounting locations!--gf]

Well, just how are they providing backhaul to these units? How many links at what capacity by what method? Wireless point to multipoint? t-1's? DSL? Just how much of an operating expense will that backhaul be?
And has anyone read the fine print of the San Francisco Planning Commission? Can't put up an antenna for "commercial purposes" without approval first. That little rule got one Planning Commission director fired a few years back when she forgot that little rule.

[Editor's Note: I don't know the ins and outs, but I suspect individuals mounting antennas on their own property and the 'free' part of the network might avoid that. As far as I'm aware, the FCC is the only entity that can control legal uses of unlicensed spectrum, including antennas. I suspect antennas used for cellular networks would be included, but not Wi-Fi. We'll see if it winds up in court, I suppose.--gf]

Local governments can regulate antenna structures, but I'm pretty sure that the OTARD rules would cover the rooftop wireless nodes. The purpose of OTARD is to prevent the local cable company from using local antenna regulations to restrict competition.

http://www.fcc.gov/cgb/consumerfacts/consumerdish.html
In 1996, the Federal Communications Commission (FCC) adopted rules for Over-the-Air-Reception Devices (�OTARD� rules). The OTARD rules prohibit restrictions on a property owner or tenant�s right to install, maintain, or use an antenna to receive video programming from direct broadcast satellites (DBS), broadband radio services (formerly referred to as multichannel multipoint distribution services or MMDS), and television broadcast stations (TVBS). However, there are exceptions to the OTARD rules, including provisions for safety and preservation of historic areas.

The FCC later amended the OTARD rules to include exclusive use areas by renters and customer-end antennas that receive and transmit fixed wireless signals.

Under the OTARD rules, an owner or a tenant has the right to install an antenna (that meets size limitations) on property that he owns or over which he has exclusive use or control.