Eye-Fi supported by Nikon D60 firmware: The Wi-Fi Secure Digital card offered by Eye-Fi can now be recognized by Nikon's D60 SLR, a just-announced 10.2-megapixel camera due in March; pricing for the camera wasn't released. The Eye-Fi integration solves a problem I heard widely discussed at Macworld Expo, where Eye-Fi won a Best of Show 2008 award: because cameras can't detect the Eye-Fi, the makers of the Wi-Fi card say you should disable automatic power conservation on your camera to avoid the card--powered by the camera--shutting down while still uploading photos. 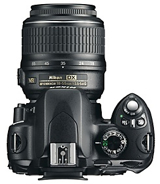 This makes logical sense, but it's irritating. I suggested in a review and to the company that because they have a server component to the offering, that they offer an option to email, send SMS, or offer a pop-up message on a host computer when uploading is complete, so a consumer would then know to turn the camera off. At Macworld Expo, when I talked to employees at the booth, they nodded without responding. I said, these aren't good ideas? They said, no, in fact, they're hearing the same ideas all the time, and they're trying to figure out how to work them in. That's good news.

But the integration with camera firmware is, of course, even better, because it makes the Eye-Fi essentially an accessory for a camera, rather than an unrelated third-party add-on. Older cameras could have firmware upgrades, but I find even though that's possible, most people who use cameras would never think of this, and thus camera makers would be unlikely to upgrade older cameras unless they sold well, and the maker could slipstream a branded offering into the retail channel that noted the camera was Eye-Fi ready.

Posted by Glenn Fleishman at 9:32 AM | Categories: Photography