After more than a year of providing hints at their capability, Eye-Fi has released their flagship product: a 2 GB Secure Digital flash card with built-in Wi-Fi for $100: The Eye-Fi Card connects over a Wi-Fi network using its own onboard processor to transfer images from the card to a computer or upload the photos to Eye-Fi's servers for further distribution. The camera has to be powered on within range of a Wi-Fi network; there's no other intervention needed.

The company has partnered with 17 major photo-sharing, photo-finishing, and social-networking services and sites to enable direct transfer to one or more of those services when pictures are uploaded, based on your choices.

The Eye-Fi is not a generic Wi-Fi adapter: that is, it doesn't magically add Wi-Fi capabilities to a digital camera. Rather, it's a separate computer that happens to live within an SD card and can access the same stored data that the digital camera can. I expect to review the unit in the next week or two.

In an interview with Jef Holove, Eye-Fi's chief executive, he explained that Eye-Fi had honed in on a very simple offering, with the potential to become more complicated later as the market dictated. He describes Eye-Fi as "a wireless memory card that lets you upload your photos," a concise summary. 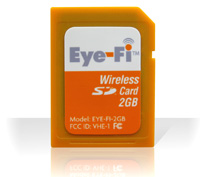 The Eye-Fi's intent is to allow zero-effort uploading of photographs taken on a digital camera. I haven't seen anything close to this amount of simplicity, including in the consumer cameras that have Wi-Fi built-in from Nikon, Canon, and Kodak. Those cameras generally don't allow full-resolution Internet transfers of photos, and lock you into specific upload services, such as Kodak Gallery (renamed for the third time in a handful of years). Eye-Fi wanted to provide full-resolution uploads, no preferred service, and eliminate the effort in initiating or managing the transfer.

An Eye-Fi needs to be set up before it's used in a camera. The device comes with a small USB dock, and software for Windows and Mac OS X that can configure internal settings in the card. The software mostly exists to connect you with Eye-Fi's Web site, where you create an account, enter Wi-Fi network settings (including passwords), and enter or sign up for any of the 17 services you may use or belong to. Various settings are then installed on the Eye-Fi and it's ready to go.

The last option sounds a little confusing: why download photos again rather than transfer them over the local network? Holove explained that it would double the battery usage to transfer the images twice, so they opted to retrieve the images after upload rather than reduce the camera's charge.

Holove said that they estimate the card consumes about 5 to 10 percent more battery than a camera would use otherwise; they found their beta testers hardly noticed the power consumption due to the increased capacity of modern batteries and more energy-efficient camera designs. The Wi-Fi component, an Atheros AR6001, uses very little energy while idle.

If you choose to upload photos, Eye-Fi's servers automatically transfer the photos to the service you selected. You can register at all the services you regularly use, and then choose which single service gets the uploaded images when you're between uploading sessions. If individual photos size or resolution exceeds the maximum allowed by a given service, Eye-Fi's system resizes the image just for them. (I'd prefer Eye-Fi uploaded to one or more services at once, but that's not in line with their approach, which is "keep it simple at this stage.")

There's no option to downsample photos on upload to reduce the upload time, however. Holove said that in this first iteration, they wanted to appeal to what they found was a common sentiment among photographers they're aiming at: the desire to upload full-resolution images. Holove said "As storage for these [photo-sharing] companies becomes cheaper and cheaper and cheaper, it becomes more affordable for these companies to store higher res images."

The Eye-Fi is shipping initially as a 2 GB SD card because higher capacities require the use of SDHC (SD High Capacity), which isn't supported on many older and less expensive cameras. SDHC is required for 4 GB and higher memory cards, and Holove said that the firm "wanted to launch a product that would work with all the SD cameras out there."