Meraki's recently announced outdoor repeater with optional solar/battery power could transform grassroots networks: Meraki has established itself as the cheapest provider of hardware and back-end controller support for mesh networking. With its $50 indoor nodes and new $100 outdoor repeater (shipping in July), the firm is making good use of its $5m in investment from Google and Sequoia Capital.

In an interview this week with co-founder and chief executive Sanjit Biswas, I discovered that despite the low cost, Meraki is "actually able to seel these devices at a small profit," Biswas said. The insides of a Meraki router are pure commodity, rather close to what's found in an inexpensive Linksys, he said. "We spent a lot of time studying the economies of scale opened up by them." 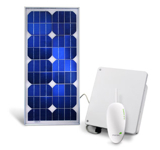 Biswas noted that he and his co-founders were graduate students for the five years prior to starting Meraki, and had to hack small, cheap gear by necessity. In the process, they put the software intelligence--the controlling part of the network--into remote servers, leaving individual devices to act as relatively low-powered nodes in a network that would self-form as it grew.

The new outdoor repeater is designed to allow those network to expand even further. With a built-in antenna that offers higher gain than their indoor node, they expect a range of several hundred feet. Optional higher-gain antennas can be installed, too. "Really what we're doing is saying, hey, we're a software company; if you want to tinker with the hardware and pick up some long-distance antennas, then we're all for it," Biswas said. Some customers have already set up 10 to 12 km links with the pre-release versions of the repeater.

The Meraki Outdoor has two 10/100 Mbps Ethernet ports to allow local networks to be tied in or to run back-to-back repeaters with highly directional antennas. For now, each device has a single radio, but Meraki--like virtually all wireless LAN and mesh/metro firms--uses Atheros chips, and Atheros recently announced their roadmap with a reference design for an access point with two separate radios.

Meraki's outdoor devices are highly ruggedized, Biswas noted. "We designed the outdoor to survive anything from a monsoon to a scandinavian winter--pretty robust conditions." Meraki's equipment is already used in 1,000 networks around the world, and there's already a need for the outdoor product to spread coverage from the inside out, as Biswas explained.

The firm developed its own custom routing protocol that builds on top of the 802.11 set of standards. This allows each node to receive and send normal Wi-Fi traffic while also transferring control information. Their mesh routing system optimizes to reduce interference rather than for the highest thorughput. "People in general using Internet access only use tens to hundreds of kilobits per second when you average it out," Biswas said in the kinds of installations their gear is used in. Groups of mesh nodes can switch channels to improve network quality or increase throughput, however.

The intelligence of the system lies in Meraki's servers--these servers provide controller features that can cost thousands of dollars with other mesh or large-scale networks on top of the higher cost of each node. Even Ruckus's recently announced small-to-medium-sized business networking equipment requires a controller that starts at $1,200 for a small number of access points. (Ruckus is focusing on throughput and signal efficiency, however, for ensuring the best quality of service with streaming, voice, and overall data transfer.)

While the mesh nodes exchange information about path efficiency, Meraki's servers handle auto-discovery, collect statistics, and provide remote management. This means that any cluster of Meraki nodes--any group of nodes on a unique channel--must have its own backhaul. But because the system is self reconfiguring, no network will accidentally sever itself by losing an Internet feed on a segment.

Each Meraki network becomes its own cloud of access with unique private addresses assigned persistently to devices that join the network. This allows someone to roam from node to node, and it also allows multiple injection points--nodes connected to an Internet feed--to allow aggregating of bandwidth. Each TCP/IP connection can be routed the most efficient way through the network. The system can also packet-shape and throttle, allowing each node to control how much of its bandwidth is used by the Meraki network. That's a critical factor when shared DSL or other connections are being tied into a network.

The outdoor repeater includes power over Ethernet (PoE) as a standard feature, including the necessary adapter. This can allow an Ethernet cable to be used to provide juice to an outdoor node that's not sited near an electrical outlet. Using electricity outdoors or on rooftops is always a tricky civic code issue, too, making PoE a better choice.

The solar charger/battery combination that will be offered for the outdoor repeater should allow use in places where electricity and Ethernet just isn't an option, whether on a condo rooftop, on a savannah, or in a park. Biswas said that they were fortunate to have on their team the right combination of engineers to slice the cost of the device down to roughly $400 from $1,000. The final price hasn't been set. "This is almost a hobby project we had running internally," Biswas said.

Solar panels are actually in short supply, driving up the cost. Through use of a custom charge controller built in house, Biswas said they cut the panel size to a third of their initial requirements. They also built Ethernet into the controller, allowing it to handle reporting of a range of statistics back to their servers. This will allow network operators to pull useful details about the panel and its battery without making a remote visit.

The batteries are lead-acid, which have a number of downside compared to lithium-ion, but which are relatively cheap and available worldwide in the right format to be replaced out on site without expensive international shipments of custom items. "We're able to use batteries that are used in security systems around the world," Biswas said.

With a battery-operated Meraki Outdoor node being recharged by solar panels, network builders of all stripes are freed from a grid requirement. Biswas said that their work on a growing free network in San Francisco led them to see this as a developed-world problem, not just a developing-world one. His customers "want us to deploy larger and larger networks; they were having trouble with the power because it's a sticking point. People would get hung up on, hey, I'm putting a power outlet on your roof," he said.

(The San Francisco network has seen over 3,000 users during its operation iwth about 250 to 300 users on during peak periods. It covers about a square mile, and it's let the company get their hands dirty, Biswas said.)

Their new outdoor product may be the biggest challenge yet to the more expensive--but more robust--nodes sold for thousands of dollars by metro-scale equipment makers like Tropos and SkyPilot. Biswas said that they weren't attempting to challenge these firms in the municipal market yet, as they have no public-safety offering, and don't view their equipment as resilient enough for that yet. Tropos, he noted, offers bullet-proof casings for their nodes. "They're hooking them up to cameras and people do shoot at these things."

For now, Meraki's early customers are entirely through word of mouth. The firm has no sales department, and continues to devote most of its efforts to extending its product line, and getting nodes into the field. I see remarkable potential for small networks to be built easily by neighborhood groups, community organizations, and business associations--and then later linked up with either more Meraki equipment or higher-end metro-scale gear.

Whatever the case, Meraki has broken the price barrier and dropped the complexity bar. Will a million neighborhood networks bloom?

This is perfect for remote locations, or situations where having a qualified electrician install power would cost as much as the solar kit. I'd like to test a few of these units for the community wireless network we're deploying in the Dallas / Ft. Worth, TX area called DFWFreeNet - http://www.dfwfreenet.org By generating your own power for the Meraki node, you're really only borrowing rooftop space to host it, which property owners should appreciate.