Hey, Fon and Whisher, move over: there's another house being built in your neighborhood: WeFi allows you to map your own and other Wi-Fi locations, and share that information via their service, which puts the spots on a map with a key. You can set up buddy lists, and see who is online and where they are relative to your connection.

There's no clear explanation of how a router gets added to the network, but the notes say that the service supports WEP and WPA (but not WPA2) encryption, which means the keys must be distributed through the application, like Whisher. The first release covers Windows XP only, but Vista and Mac OS X are coming. (A download key is needed at this stage of the beta: 07ApM81D3.)

Esme Vos--on WeFi's advisory board--thinks that WeFi is distinct from Fon and Whisher because the former requires specific hardware and a network membership, while the latter isn't as good at finding free locations as it's an opt-in system. I tend to agree that it's distinct in this fashion, but that could be a problem. With more people being arrested around the U.S. and worldwide (Singapore, notably) for using open Wi-Fi access points without proper authorization, having an army of users mapping unprotected locations could be problematic even with an option for the operators of those locations to opt out. Some kind of accommodation must be made to avoid misuse of other people's networks in a systematic fashion. 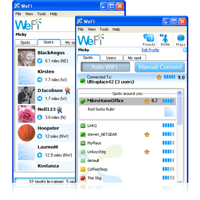 I have a hard time seeing that without a reliance on extra features, how WeFi improves on JiWire's offline hotspot directory. The mapping is nice, but JiWire only lists purposely public hotspots. And the mapping would require a live Internet connection, in which case you could use JiWire online or any other hotspot directory to locate service. (Disclosure: I have a tiny number of shares in JiWire.)

Looking at the troika of Fon, Whisher, and WeFi makes me think back a few years to another group of three: Joltage, SOHOWireless, and Sputnik--not because I predict any particular failure, but rather because of some resonances. Those former companies were each founded with the idea that grass-roots installation of hotspots would lead to the creation of massive networks that each had their own sets of users. Joltage went under, SOHOWireless disappeared (its Web site is still alive, with an old copyright date), and Sputnik turned into a Wi-Fi network management firm that sells a combination of controller software and inexpensive manageable devices. Each had a revenue model behind them, and at least Sputnik had a free option.

The reason those three firms didn't succeed in their original mission was that the technology was too expensive and slow, and the range too short to build an affordable, effective network. Sharing an Internet connection was problematic, too, and broadband wasn't yet widespread back in 2002 when they launched. Today, Fon can ship a $40/€40 router that's more powerful than most 2002-era PCs, and broadband is widespread enough, coupled with their deals with Time-Warner and BT to make that a non-issue at least in the U.S. and U.K. Whisher and WeFi aren't dependent on routers. The three older firms had no chance of reaching any kind of critical mass.

However, it's probably worthwhile to read my response to a Robert X. Cringely column written in 2004 in which he proposed a WhyFi network. As I related what Cringely was suggesting: "He expects that every participant in the project who offers free Wi-Fi will eat the bandwidth bill in exchange for free equipment, which will be loaned not given to them. Only those providing hotspots get free access to the network." (Sounds quite like Fon in some ways, no?)

My conclusion was that WhyFi wasn't needed: "Free commercially funded Wi-Fi is an idea that’s spreading, but it’s going to spread in the vernacular: not with a centralized database and huge funding. Each business or group of businesses will make their decisions and roll it out, and eventually it’s going to be trivial for someone to find free, commercially supported access (not to mention free community and free municipal) in any business district." I thought scattered hotspots in unpredictable and off well-traveled paths by tourists and locals would have little value.

Three and a half years later, this is mostly true, but I don't think my argument refutes the merit of Fon for mobile handheld roaming--though the density they still need to achieve is much higher than what they have today--nor Whisher and WeFi for linking hotspots socially. Fon pays almost nothing beyond its router subsidy for building its network; Whisher and WeFi pay just for software development. The former does require someone swap out or install a Wi-Fi gateway; the latter two firms work with existing ones. The cost and complexity isn't high for any of the three networks.

The part I missed in 2004, however, was confederation: Fon, Whisher, and WeFi are all building separate grassroots networks which will have distinct user bases. Whisher noted at its launch that Fon users could also belong to Whisher; Whisher shares private Wi-Fi, while Fon manages public Wi-Fi. A La Fonera router has both a public and private network, and thus that could work.

But it's unlikely you'll find one user that chooses to run more than one of these networks, which restricts possibilities if the networks offer complementary purposes. Confederation would allow some kind of common set of user parameters and some kind of roaming across networks, or at least an exchange of information. That might allows a Whisher user to include a WeFi buddy. Or a Fon "Linus" user who shares his or her access point for free to other Linus users to roam onto open Whisher or WeFi access points that have been programmed into that system. (Whisher and Fon have bad blood due to conflicts among the founders, however.)

A lack of confederation is why some people use five different instant messaging clients, and others (like myself) are resident on one network and can't IM with people using other systems. The growth of confederation among text messaging systems in the US led to an explosion in the use of SMS, an area in which the U.S. once lagged other cell-phone heavy countries.

In a situation where we could have multiplying social and other grassroots networks, either the biggest pockets win and the other fade away, or the best idea that requires the least effort waxes while the others wane. Confederation and roaming among these networks could be a good long-term strategy to ensure unique characteristics of each network without making users choose.