Share your network with friends and colleagues without managing passwords, says Whisher, but that's just for now: Stealth startup Whisher comes out of the woods today with an approach for allowing simple access to secured networks at homes and small businesses, as well as free hotspots. Whisher requires the use of a "heavy" (read: large) client application that's available for Windows, Mac OS X, and Linux. The program handles account and password management; there's no configuration changes or firmware required for access points. "It's not about reflashing routers at all," said Ferran Moreno, Whisher's CEO and co-founder.

To share a network, you create an entry, enter its password (if any), and choose buddies that can access it. "You can create your own Wi-Fi community, by deciding with whom you share and when," Moreno said. Buddies must download and install Whisher, and create accounts. There's no cost for the software or this functionality. Hotspots that want to be open and free can still protect access via WEP and WPA, and use Whisher as the "bar to entry." (The trick is that each copy of Whisher has an encrypted database storing passwords for all open networks, and the passwords for buddy networks.) 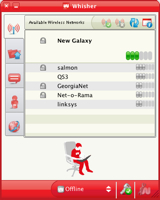 The buddy notion bypasses the need to provide friends and colleagues with your network password, or even co-workers in a small-business environment. The centralized management means a single change flows the modified password to your buddies, or to everyone for open networks.

Whisher is backed by Swisscom, one of the largest European hotspot network operators, and Benchmark Capital, investors in Tropos. The investment amount wasn't disclosed.

The application includes file transfer software and instant messaging, but both features are currently limited to allow exchanges only over the local Wi-Fi network for registered users. That limit means that someone who installs the Whisher application and doesn't register for an account can still access free hotspots, but if they want additional local features, they'll need to create an account. A hotspot can keep a CD or memory stick handy for customers to install the Whisher software, which doesn't require a restart under Mac OS X, at least, to get up and running.

Whisher represents a pendulum swing back from the Web-based gateway access that I would argue has plagued the hotspot industry. The gateway page took hold before 802.1X supplicants were a viable way to allow access. (Windows XP and Mac OS X have included supplicants for at least three years; Unix/Linux flavors have free and for-fee supplicants available.) If the hotspot concept started up today, it's pretty clear that a standard login methodology around 802.1X would be adopted for simplicity and security. (T-Mobile's Connection Manager uses 802.1X seamlessly, for instance, and has for years.) When you read complaints about how Wi-Fi doesn't work as a public access means, almost always the complaint is either with cost, or with the trouble in producing an authentication session through a gateway page. (I was just wrestling with AT&T FreedomLink's ugly approach to this on a recent trip.)

By putting the intelligence in client software, the company has to deal with supporting multiple platforms, but with the massive heterogeneity of Wi-Fi routers, that may be a simpler win than dealing with creating one's own firmware or pushing out custom routers, which has been Fon's approach.

(Moreno said he worked with Fon founder Martin Varsavsky, but left over differences in achieving similar communities and scale. Varsavsky disputes this over at Business 2.0. Moreno said that Whisher could absolutely work on top of Fon's network as an application to ease access, provide local network services, and even content based on location, as the software could do on any network. CTO and co-founder Mike Puchol has engaged in rather public Fon-baiting and criticism, including a lot of back and forth with Varsavsky in their respective blogs: Varsavsky, Puchol.)

Downloading an application used to be the kiss of death when broadband was scarce, and it sometimes seems antithetical to the Web 2.0 aesthetic of AJAX-based browser intelligence. The Whisher app ties into that, though, by using an embedded browser, and intra-program updates. "It won't be any more welcome page, enter your credentials, and so forth -- it will be a uniform experience," said Moreno, and that's really the key.

The company hopes to see revenue by leveraging its application as a way to deliver advertising for hotspot networks, and as a vehicle for hotspot and metro-scale Wi-Fi operators to resell service through a client that someone may already have installed. As with Devicescape's device-oriented model, Whisher will use Web-based accounts eventually to handle credit card numbers or other payment mechanisms, as well as other centralized account details. "We're leaving it open to be integrated with any WISP or any technology it has for authentication and billing and so on," said Puchol.

Boingo: Software client for Mac OS X and Windows mediates access to aggregated partner Wi-Fi networks. A monthly subscription fee allows unlimited access via computer to US locations and some international locations. Many international hotspots have metered, negotiated per-minute or other rates. A new VoIP offering includes unlimited VoIP worldwide at participating locations. $22 per month or $8 per session, plus metered rates at some international locations (noted in their hotspot finder). Boingo has north of 60,000 hotspots signed.

Devicescape: Embedded software that Devicescape wants manufacturers to include in their handheld products, and that can be installed on some devices, allows access at public hotspots that require authentication by tunneling login information via DNS. The handheld device stores no authentication information, and uses the tunneled credentials and other details to perform the login; entering credentials and account details occurs at a Web site. Devicescape wants to establish the notion of per-device sub-accounts at hotspots and aggregators, allowing a single user to use more than one phone, game console, camera, and PDA--with perhaps different, small monthly rates for each--at the same time. Free, but requires accounts at hotspot networks. Supported networks include AT&T FreedomLink, Fon, and T-Mobile USA. (Support does not indicate the hotspot operator approves or works with Devicescape's system.)

Fon: Grassroots and commercial network built one at a time, with individuals flashing commercial, commodity gateways from Linksys and others with special firmware, or purchasing typically subsidized routers that are preconfigured. Network sharers, called Foneros, can choose to charge for access to their hotspot or share it for free. Those who charge receive half the revenue. Those who share can access any other shared Fon location for free. Non-Foneros pay for usage everywhere; those who share for free receive none of the revenue from non-members using their location. Fon's model may extend beyond flashed/custom routers soon with the release of Mac OS X software that turns a Mac into a Fon hotspot, allowing routing from a cell data network (cell operators uniformly disallow this in the US, but it would be difficult to track). Fon claims tens of thousands of active Fon hotspots, but I can't find a citation for their current count. Their mapping software shows registered users and active locations.

Thanks Glenn for your detailed description as this is the first time I read about what Whisher really does. I do agree that it is complementary to Fon and I welcome its launch. For clarification purposes though, Ferran never worked for Fon nor at Fon. Ferran never worked for me either nor for any of my other companies or investments. Ferran worked instead for a failed Spanish company called Air Bites owned by Swisscom in which a lot of money was invested and lost with a concept of shared wifi that involved selling a DSL wifi connection to a customer and then reselling the extra bandwidth to its neighbors. Ferran presented this company to me in early 05 as an investor to see if I would rescue the company but after carefully studying the model I passed on this opportunity. Fon was incorporated in Jan 06. In any case I wish Whisher success as well as all WiFi ventures because for all of us who love WiFi and wish it was everywhere these ventures all help out.

[...]All hell broke loose when the news about Whisher, initially under embargo until launch, was spilled out by Erick Schonfeld. Everybody from wifinetnews.com to venturebeat.com rushed in to cover it and make the headlines.[...] from Wirelessisfun.com live coverage on Whisher launch unfolding.

Martin is right in the sense that I was never directly employed by FON...in the sense that FON didn't exist as a company! Having some 500 emails exchanged with Martin from ferran@fon.es, and the original design of the business cards for us, could somehow prove that we did in fact work together for many months on the FON concept, until the very last minute.

This is not the place to air such disputes, and I apologize, so I will just say that all that is behind me now, and all I am concerned about today is making Whisher a great success.

I have tried three of the four products and companies mentioned. Whisher has a really nice and clean interface, as well as an easy to use concept. The question is how will these companies really make money in the end. Those companies attempting revenue from paid Wi-Fi access are likely hitting a dead-end, with the exceptions of those with control of key locations (e.g., airports, hotels that still charge). How much monthly service revenue does Fon currently make? We won't know, but it's likely not much.

Is Whisher also going for the wi-fi voice market against the cell incumbents? Because Whisher's costs are much lower, it may have a slightly better chance, and it's definitely easier to use. But, it's a very tough market with more questions than answers.

Whisher Shares our WiFi passwords with everyone on Whisher!!
We can just leave our routers open in the first place.

[Editor's note: Not quite. Whisher requires the use of an application, which contains additional features, and can help a venue that wants to use access control and security on their network. It's an interesting alternative because the venue can preload files on the network only accessible via Whisher, offer chat, etc., with no infrastructure at their location.--gf]