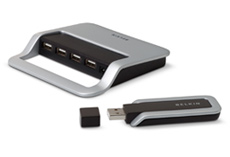 Popular Science gave the not-yet-shipping hub a "Best of What's New" award: The magazine picks products released between November of the previous year and Oct. 31 of this year, but Belkin's delivery of this device slipped. Belkin won a Best of What's New award alongside Airgo for its early MIMO router in Popular Science's 2004-2005 cycle. I've written for Popular Science in the past, so I know that the editors must have had a high degree of confidence that the device would ship by the end of last month.

Belkin's so-called Cable-Free USB Hub (MSRP $130) will use ultrawideband (UWB) to allow driver-free connections by pairing a UWB dongle that plugs into a USB port on a host computer with a four-port AC-powered hub that can be located elsewhere in a room. In the press release for this award, Belkin doesn't provide an expected shipping date.

Belkin was originally planning to release this in early 2006, and demonstrated prototypes (or at least brick-o-types: nonfunctioning plastic models) at CES and Macworld Expo. Their first design was based on Freescale's UWB chips, which have not yet appeared in a shipping product. Freescale was sold to an investment consortium recently, and I have expected to see their UWB line dropped in favor of a focus on the company's vast array of revenue-generating, already-shipping technology.

In summer, reports appeared (that Belkin later confirmed) that the company was shifting from Freescale to a vendor that's part of the Intel-led, 200-member-strong WiMedia Alliance. Belkin noted today in their press release that they would use technology from Wisair. Wisair has a USB hub reference design that will obviously be the basis for Belkin's product. Reference designs are generally fully developed products ready for customization. Because this hub is driver-free, there's really nothing beyond an injection-molded case and some logo silkscreening that needs to be added.

(I said that Belkin's hub was "so-called" because Cable-Free is Freescale's term for USB over UWB; the WiMedia Alliance has a partnership with the USB Implementers Forum, and Wireless USB is the trademarked and supported term that those two organizations will push for USB over UWB. Belkin might change the name for this reason.)