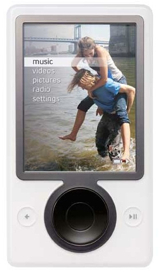 Microsoft will sell its Wi-Fi-enabled Zune music player for $250: The device will ship Nov. 14 in the US, and feature a 30 GB hard drive and some preloaded content to try out, as well as an FM tuner. A Zune Pass subscription is $15 per month for access to millions of songs in their library during the period of the subscription. Songs are purchased for 79 "points" each, using the Microsoft Points system, which they say is a portable method of storing value across their products.

Zune has Wi-Fi built-in for transferring "samples" between Zune users. Songs can be sent to another user, who can listen to the song three times within three days and then flag it for purchase. I'm still a bit confused about whether Zune Pass subscribers, when they receive a song from another subscriber, then have to enable that song when they're connected to the Internet again.

Zune owners can apparently download and transfer unprotected (Creative Commons, self-ripped, etc.) content, although Microsoft will apparently not allow that content, when transferred over Wi-Fi among Zune devices, to escape the three-day, three-playbacks limit. A Microsoftee working on Zune says that this doesn't modify the file; it's a device-based limit, and he claims this is technically not digital-rights management (DRM), as DRM normally accrues to a file, not device. In related matter, as the Electronic Frontier Foundation (EFF) noted two weeks ago, the Zune will not play non-Zune protected music, even though it uses Microsoft's own Plays4Sure DRM.

Microsoft will offer a host of accessories, all oddly simply named. They did learn something from their internal "why iPod branding is great and Microsoft overlabels everything" exercise. The Home A/V Pack is $100 for a wireless remote, output cable, sync cable, dock, and ac adapter. The Travel Pack ($100) includes a remote, earphones, bag, sync cable, and AC adapter. The Car Pack ($80) has an FM transmitter and car charger. These items will all be sold separately as well.

Is there a link to the eff site that you mentioned? There seems to be a paucity of information on the main eff site re : wrapping unprotected content in DRM.

[Editor's note: I've updated the main post with new information from EFF and other sources--gf]