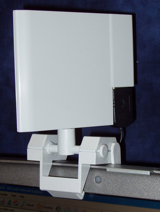 The Lehigh University project turns commercial: The Wi-Fire is a high-gain, directional, external, USB powered-and-attached Wi-Fi adapter with Windows XP support. The idea is that this is somewhere between a high-gain PC Card or ExpressCard, which is anchored into a laptop and only works with laptops that offer a card slot, and a high-gain bridge that requires external AC power and an Ethernet port. They say they've seen 30 Mbps over 802.11g at distances where a normal adapter hit just 1 Mbps. They also claim about 1,000 feet of range, which, for this gain, is pretty reasonable via line of sight.

For $150, about the price of a bridge, you get a fairly high-gain unit. According to their numbers (15 dBm transmit power and 10.4 dBi antenna gain), it's roughly 25 dBm of effective power output (EIRP) or 350 milliwatts. The flexibility of this unit might make it a perfect match with metro-scale wireless networks. Bridges often run at 200 mW to 400 mW of transmit power with omnidirectional antennas that have relatively low gain. Wi-Fire also has high receive sensitivity at -98 dBm. The prototype could switch between omni and directional, but this approach appears entirely directional (and simpler).

Because a bridge is portable but requires line power, this is much more flexible. Combine a Wi-Fire with built-in Wi-Fi that you enable sharing on, and you have a bridge plus AP combination using two radios for best channel separation and throughput.

The folks behind this have done a great job ratcheting up from student project into a shipping product. Lehigh University has a small feature on how three students at the engineering and applied science college received a $2,000 grant in 2004 to create a prototype, assembled a team that built a project that won a $15,000 state grant to create and test 50 prototypes, which in 2006 turned into a $150,000 loan from a university incubator fund.

The company has 1,000 Wi-Fire units ready to sell, aiming at college campuses and bookstores. They plan to go into national marketing and additional products in 2007.