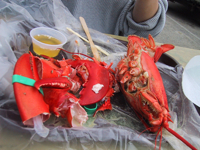 One of the oldest wireless ISPs I'm aware of gets upstart in its backyard: Midcoast Internet Solutions started offering wireless broadband in 1997 using equipment from a firm later acquired by Alvarion. They're based in Rockland, although they started up in a neat little town nearby, picturesquely named Owl's Head, where the local airport is. (Of course, every town in Maine is named something picturesque. I lived in Camden, a few miles north of Rockland, for about two years in the early 1990s working for a distant and wacky teaching arm of Kodak.)

Ethernet inventor Bob Metcalfe has a place up the way a few dozen miles, and offered the firm's founder some good advice more than 10 years ago. (I wrote about Midcoast back in 2001; Metcalfe, who had or perhaps still has a sheep farm, wrote about them the same year when he was an InfoWorld columnist.)

About three blocks from their HQ, you'll now find RedZone, which started offering wireless broadband this last spring, and made a formal announcement about its service. The two firms are competing across a quite similar geographic area and offering quite similar pricing and services. Midcoast appears to still be using Alvarion gear. RedZone opted for SkyPilot equipment. Rockland's county, Knox, has about 40,000 residents.

Is the market mature enough to allow for competition at this scale among a set of small towns? It's part of the market that Clearwire will be after, too, with many of their licenses in less-urban areas of the U.S.

When I last visited Camden, cable modem service was spotty and DSL was barely available. Dial-up and leased line services would be the only real alternatives to wireless broadband. A few years ago, Midcoast had to bring in their T-1 lines in that standard's original, ugly form: a huge bundle of copper wires patched into their T-1 CSU/DSU. I know there were plans to bring fiber through and other, modern services, but I don't know at the moment whether late 20th century and early 21st century technology is running on 19th century copper.

(Lobster courtesy of Beal's on Mount Desert Island. My wife ate the one pictured.)

We're using fiber now. Dual fiber connections to both Rockland and Camden. It fortunately is the 21st century in Maine now. We are using a mix of Alvarion and Trango gear. We have been competing with Mesh-Air as well as Redzone. Mesh-air has recently shut down. We also work with Abacustek.com to provide wifi services. In nearby Lincoln county we had competed with clinic.net, whose founder has left town and is wanted by the sheriff. Wifi spectrum seems to be the near term issue rather than customer quantity.

Midcoast really can't be considered a competitor here in this area, since they have very few wireless customers. They are primarily a dial-up shop and DSL reseller. Verizon and Adelphia, now Time Warner cable, are the incumbents, and the real competition. Midcoast has been in business here for about 10 years. It's great to hear that they view us as their competition.