Linksys Tries To Make It Easier 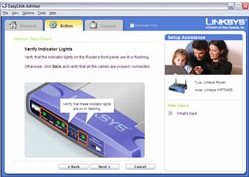 Linksys has rolled out its EasyLink Advisor, a tool for network and gateway management, on a single model to start with: The EasyLink Advisor could also be labled, "A tool by which purchasers of our equipment have their frustration lessened and thus are less likely to stuff our gear back into a box and fling it at the salesperson at Best Buy who sold it to them."

Customer returns, technical support calls for setup, and over dissatisfaction are the biggest problem for Wi-Fi equipment makers. I have heard in some circles that return rates for gateways can be over 30 percent. Anything that can be done to make the first steps easier will result in substantial improvements in margins. Belkin recently tried adhesive, lettered labels for its Draft N device coupled with a large single sheet that had the series of directions. And they put some big glowing icons showing connectivity status on the top of the device. All good measures.

Linksys is attacking this on the software side. Over the years, I've watched their Wi-Fi setup tool improvement quite remarkably, although I typically skip the chase and go straight to the Web interface for advanced setting changes. The Linksys EasyLink Advisor wants to pull in more factors than just the gateway that you're setting up. The setup wizard shows graphics of the different components, cues you to plug in different parts, and confirms that you did, in fact, plug things in correctly. Icons on the front of the gateway also provide additional confirmation, much like Belkin's icons.

Now, the next part is quite interesting, because it pulls in network data, showing the relationship of your gateway to a DSL or cable modem, and the Internet (to confirm that you have access to our global computing network). And it shows other computers and devices on the network. The software can auto-discover information about Linksys devices. I'm guessing that the small Web server that's in Linksys equipment has some auto-discovery subsystems that have been kicking around unused for a while.

EasyLink Advisor also handles troubleshooting, alerting you when connections go awry, and can create a security configuration file that can be copied to other computers to add them to the network. It's not WPS, the Wi-Fi Alliance's upcoming simple security setup, but it is a fairly straightforward approach in which a Windows executable program is created that has all the settings you need to join the network built in. Run the program, and a new computer is added. The system will also provide manual setting information for non-Windows systems.

From Linksys's perspective, a final feature worth mention is what they label Support: the software can pull all the various version numbers and other details, so when the customers places a call to tech support, they have everything right there to tell the tech. This could reduce several minutes and additional frustration from a tech support call.

The software is a free but currently works with and comes with just the WRT54GS model. Linksys promises more models will receive this upgrade soon.

Posted by Glenn Fleishman at 10:59 AM | Categories: Home, Security | 2 Comments

I have been using ELA since it was released with my wrt300n and it works great as well as identifies it and shows a picture of teh wrt300n...

One of Linksys' newest products, the SRX Router and PCI adapter with SRX400 (WMP54GX4) will not work with Vista. Their website, http://www.linksys.com/vista indicates that it will NEVER be supported by Vista. If you buy it plan on being orphaned. I called Linksys "Customer Service " to see what kind of policy they had on such an issue. They said they will not exchange it for a product that will work with Vista because that is against Linksys policy!

When I asked to speak with a supervisor, I was told that (1) she was busy and did not know when she could take a call and (2) would not be calling me back because that too was against Linksys policy!

So, buyer beware. The company will not support its customer base or even its reseller base, which I am part of.

Guess whose products I will never buy again.