« Podcast #12: Dana Spiegel of nycwireless on NYC Wireless | Main | Once Again, It's All about the Utility Poles »

Glenn on Microsoft's on10 Program 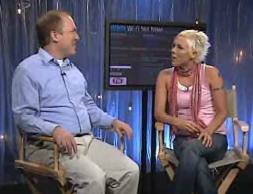 The folks at Microsoft's on10 invited me on to talk about Wi-Fi and myself: Very flattering offer. We talked quite a lot of about the frustrations of Wi-Fi and some current developments, and host Laura Foy also touched on the issues of being a journalist blogger. Laura and co-host Tina Wood are both great sports, as you'll see in a segment that was filmed before mine and not yet posted. I can't reveal what's in it; you'll have to check back for a combination of a kitchen product and technology.

on10 is a venture of Microsoft filmed at their spectacular Redmond studios. That sounds like I'm kidding. I've been in television studios before, and on10 and related ventures are quite well set up. The interview had two floor cameras and a remote, as you can tell from the editing.