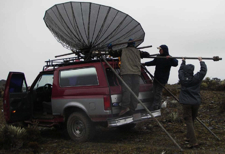 Let's trust their reporting, but it's an informal record: A team in Venezuela went up a mountain and came down the unofficial holders of the longest Wi-Fi link record at 167 miles. They used Linksys WRT54G using open-source firmware (DD-WRT) using retrofitted satellite parabolic dishes.

When I read this story initially I thought, well they may have used Wi-Fi protocols, but this isn't Wi-Fi in the sense of regulation-conforming unlicensed use within the signal limits. The last Wi-Fi distance winner, Cincinnati teenagers who created a 125-mile link for DefCon's Wi-Fi Shootout, clearly exceed Part 15 rules, but claim they were using Part 97 (amateur radio) rules. Part 97 ain't regular Wi-Fi.

But I ran the math for the South American claim of 279 kilometers (167 miles), and it seems to check out under FCC Part 15 rules. I don't know whether Venezuela is regulated in the same fashion, however.

They said they were using 100 mW output from the Linksys WRT54G with a very short cable to reduce signal loss. Their antennas they calculate at 32 dBi, although that's a rough number. That gives them an extremely high EIRP (effective isotropic radiated power) of 158 W, which seems very high. I went to look up the FCC Part 15 rules and found that rule 15.247 allows a 30 dBi antenna with a 22 dBm or 158 mW power-at-antenna signal. With no amplifier between the Linksys and the antenna, I believe they qualify there. So they might be slightly over on the antenna gain, but this allows them an EIRP of up to 158. So far, so good.

The next question would be link budget: with two identical setups over the 270 kilometers of the test they set up with an unimpeded Fresnel zone--no obstacles through the entire spread beam between the two locations--they have a pretty clear formula. Assuming 20 dBm (100 mW) at the Linksys, a very small -3 dB cable loss, two 30 dBi antennas, and a 149 dB of free-space loss, with a receiver sensitivity of -85 dBm (which checks out with what they saw)...they have a 10 dB link budget. Which should be sufficient for a test.

If any of these numbers are off by a relatively small percentage, they'd be violating the law or the test wouldn't work. But it's a fairly impressive link at the edges of what (at least in the US) is legal and certainly what's possible.

I'm not an engineer, and thus I may have made errors in my assumptions. Please add notes in the comments if you'd like to correct my math or figures. (I used this WLAN Link Planner for link budget, this reference for Part 15.247, and this EIRP calculator.)

Thanks for the congratulations Eduardo, also on behalf of my friend Ermanno. And thanks to Glenn for the calculations and the comments on our link, you made it correctly, or at least we got the same numbers as you :)
And well, we are now thinking to explore how farer can we go with the remaining 10 dB of margin :)