« The Costs of Running a Hotspot Network: ICOA's Filing | Main | Mesh Standard Might Create Baseline Interop, Not Mix and Match » 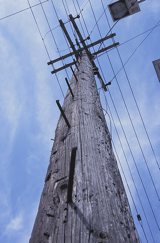 A story from Oakland County, Michigan, shows the power of utilities in the future of metro-scale Wi-Fi, WiMax, and what have you: MichTel is to blanket over 900 square miles of Oakland County during a two-year build out that will involve what's reported here to be as many as 20,000 access points, but which the company expects to net out to be fewer as technology improves during their deployment.

The stumbling block they appear to not have reckoned with is the utility, DTE Energy, which owns most of the utility poles on which the access points will be mounted. Oakland County, this story says, is providing access to just 2,700 mounting points outside of the utility's poles.

Oddly, MichTel comes off as quite naive about a utility's interest in providing speedy access to their poles. MichTel's general manager said in this story, "DTE said we have to identify the pole, send the information to them. They have to send someone out to look at the pole. They haven't been able to give an answer on how long that will take. A day? A week? Weeks? All that impacts being able to start and finish in a reasonable amount of time."

Part of the Telecommunications Act of 1996 as interpreted by the FCC specifically requires that, in the absence of good-faith negotiations that proceed first, "a utility charges just, reasonable and nondiscriminatory rates for pole attachments." It's a pretty involved interpretation (read up on the overlashing provisions, for instance), and it primarily sets the groundwork for a way that an entity that is unable to get access to poles can complain to the FCC and have orders and sanctions issued against the offending entity.

Because DTE Energy and other utilities don't routinely make available thousands of poles at a time, it doesn't seem unusual at all that they have neither a timetable nor an expedited process. In some cities, the requests for proposals (RFPs) for wireless networks lay out the attachment issues, describing what poles, buildings, and other facilities are available for mounting. Some cities own the utilities, which may make it easier for blanket contracts to be signed. In Philadelphia, three of the five contracts that EarthLink and the city have to sign involve utilities and mounting fees.

And, note above, the 1996 Telecom Act's order on poles only requires it be used as a backstop to negotiations that fail. A Wi-Fi or WiMax operator could negotiate a deal with a utility better than that defined in the FCC order. Pole access fees aren't meant to provide real profit to the entity that owns the pole, but to make it worthwhile to comply with the rules.

When Tacoma Power began work several years ago to build their fiber/coax infrastructure that became the Click! Network, they voluntarily ate the cost of replacing thousands of poles, and moved incumbent telco and cable wire at the power company's expense. Why? Because it was worth it to them to have the best pole infrastructure to support their new system, and to replace inadequate and patchily maintained poles. But this demonstrates the power of the incumbent, too, to make that sort of scale of activity happen when it's beneficial to them as well as their pole tenants.

Access to facilities and rights of way are what defined the franchise rules for cable companies to provide television service across the way, and franchises are perpetuated because they bring in recurring income to towns and cities. These new metro-scale wireless networks are a new form of de facto franchise in which the new operators will pay recurring fees and taxes of all kinds. Whether utilities will impede or streamline networks that rely on their infrastructure is an open question.

How about a solar powered WiFi access point?
They could eliminate the power supply problem entirely.
We just announced such a product that addresses precisely this problem, plus is has a long range wireless mesh backhaul.

[Editor's Note: I've wondered that myself. I expect that the current generations of products were optimized for RF, given the competition in the market, not power use. I would expect future generations to have multiple options, including accepting line power during the day to store in a battery to use on street lights that are unpowered at night (see Toronto Hydro's dilemma).

Also, to serve the developing world, there's no way to expect either power or reliable power outside or even inside urban areas. It would possible to place ruggedized, solar/battery combinations further out of reach from thieves. An early cell operator in Africa started gluing Madonnas on top of their equipment and thefts stopped.--gf]