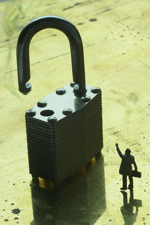 I've written disparagingly about the WAPI spec over the last two years: The WLAN Authentication and Privacy Infrastructure (WAPI) standard backed by the Chinese government has two key flaws. First, it's not international. Second, it's proprietary. Nonetheless, the government--despite earlier indications that the standard was stalled or wouldn't be enforcement--has decided to keep pressing on.

Companies that make Wi-Fi chips or devices designed for use within China were at one point going to be banned from selling in that country unless they partnered with a domestic firm, one of about a dozen, that had access to the license for the specification. The issue became heated enough that the US government in the form of Colin Powell and others became involved. The requirement was dropped, and the standard was introduced into the ISO process in the hopes of getting approval through that body.

According to IDG News Service, ISO is extremely unlikely to become part of any ISO WLAN security standard. The IEEE 802.11 Working Group pointed out the problems in a filing: There's no way to evaluate the actual security given an undisclosed mechanism; and there's no shipping devices with WAPI embedded, or even prototypes to test.

I'd add to that a concern I have beaten the drum about: There is zero chance that a government-backed security standard doesn't include back doors for monitoring. The complaints about 802.11i being "American" or "Western" or even "garbage" (as WAPI's developer stated) are a smokescreen for the ongoing desire by the Chinese to reject Western hegemony over its technology and reject security methods that allow for no penetration.

The response in China appears to be that companies will continue to develop WAPI which might find a market among government buyers. A Beijing-based analyst thinks it unlikely it will become mandatory for all Chinese users--which makes sense with likely tens of millions of existing Wi-Fi devices already in use in the country and no timetable for WAPI-based systems to become available.

The whole argument directed at these totally disingenuous WAPI pushers should be peppered with frequent and forceful references to Kerchoffs' Law.