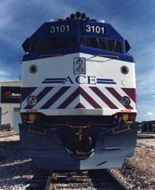 The Altamont Commuter Express (ACE) Rail system will spend $200,000 to upgrade its trains' Internet connection: It's been over two years that U.S. and Canadian trials of train-based Internet access over Wi-Fi have been in progress using PointShot's products. The VIA Rail line in Canada has finally gone live with a Windsor-Quebec City route, and ACE turns up the volume on its long-running experiment, too. The ACE line seems a little disgruntled--"we're using old beta-test equipment now"--but also a little too enthusiastic in claiming T-1 service, which is an unlikely speed for a moving object using satellite or cellular networks. A few hundred Kbps is more likely downstream and less upstream. VIA eventually settled on satellite because cell operators couldn't meet their needs across the route.

Posted by Glenn Fleishman at 9:48 AM | Categories: Rails